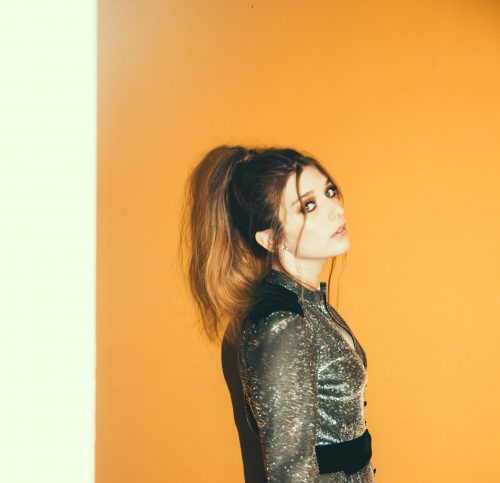 I first discovered VÉRITÉ via her insanely catchy pop 2014 song “Weekend.” It was only her second single, and yet I was already late to the party. The first single – “Strange Enough” – reached number one on Hype Machine and landed her as Twitter’s “#1 Most Viral Twitter Artist” of that week. And this was all before anyone knew her real name!

We know now: It’s Kelsey Byrne. Since that auspicious debut she has released a few EPs and, last year, a terrific debut album Somewhere In Between. She performed its lead single “Phase Me Out” on the Today Show. And throughout it all, she’s performed some incredible covers. We highlighted her stunning new Sufjan Stevens cover back in January, and it’s also well worth seeking out her covers of The 1975 and Childish Gambino.

She’s currently on tour with Irish singer-songwriter EDEN (dates here), but took some time out to tell us about her own favorite cover songs.

VÉRITÉ says: “I grew up covering this song and found out it was a cover a few years ago. The original by Ednaswap is a perfect, lethargic grunge song and is currently my favorite version.”

VÉRITÉ says: “I love how this takes what was an amazing, horribly overplayed song and makes it a slow, pulsing heartbreak.”

VÉRITÉ says: “Johnny Cash can transform any song into his own voice and perspective flawlessly. His voice is pristine and perfect.”

VÉRITÉ says: “This song has the ability to make everything seem still.”

VÉRITÉ says: “This is undeniable gold.”

Buy VÉRITÉ’s debut album ‘Somewhere In Between’ on all platforms. She’s currently on tour with Irish singer-songwriter EDEN (dates here).