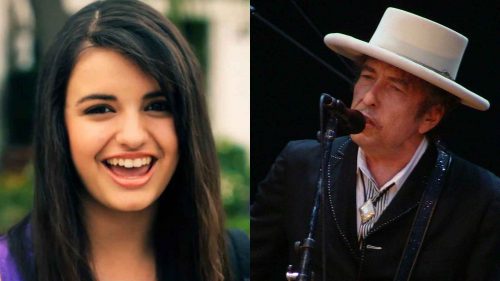 But Black had supporters. Lady Gaga called her a genius. Simon Cowell of American Idol declared himself a fan, nothing that “the fact that it’s making people so angry is brilliant.” He went on to add, “Anyone who can create this much controversy within a week, I want to meet. I love people like that.”

Cowell certainly would love the author of “Friday,” and the Tosh.0 people certainly need to rethink their snarky headline. For, even as the Friday Fenomenon steamrolled America, word began trickling out that the man who wrote the song was far more than just another pretty voice. That’s right: Rebecca Black didn’t write “Friday.” Bob Dylan, the man behind the best song of all time according to Rolling Stone, crafted the lines about which seat on the school bus to select.

It’s not clear when Bob Dylan wrote “Friday.” Some set the time frame in 1964, during the Another Side of Bob Dylan period. Others believe it to be one of the Basement Tapes songs, which would make sense; are these lyrics really more inane than the “Million Dollar Bash” lines “I looked at my watch, I looked at my wrist / Then I punched myself in the face with my fist / I took my potatoes down to be mashed / And I headed on down to that million dollar bash”?

There are even more interpretations of what the song means. Dylan has often been obscure, but in “Friday” he came up with lyrics so blank that people have rushed forward to provide their own theories. Like the day of the week itself, the song means many things to many people.

YouTube commenters persuasively argued that the song was about Cold War paranoia (the delicious “everybody’s rushin’/Russian” pun). Or the song was a warning to John F. Kennedy (“gotta get down on Friday”) that went sadly undelivered, leaving Kennedy to make the wrong choice about which seat he could take. Or maybe the song’s narrator was a stoner with the munchies (“gotta have my bowl, gotta have cereal”) awaiting his connection, a gateway to Lou Reed’s “I’m Waiting for the Man.” “Dylan describes the dilemma we face between forward-thinking enlightenment and backward-thinking prejudice in the powerful metaphor about ‘front﻿ seat’ and ‘back seat,'” claims another listener, and who’s to say he’s wrong?

The most common interpretation involves the Vietnam War, which hung heavy over everyone’s head in the sixties. Young men are at bus stops, on buses, heading to the airports that will fly them overseas. Even with their friends by their rights, they’re frantically muttering to themselves, “Fun. Fun. Think about fun.” It casts a chill over the song, one that could be wiped away by a bubblegum-pop cover, but couldn’t be torn free of its origins.

Rebecca Black may not have been the first artist to cover “Friday” – that would be the Byrds, proving they’d cover anything Dylan wrote – nor would she be the last (Thanks, Glee!), but she certainly got the most attention for her version. “As much as even I laugh at it, it’s not something I regret doing,” she said later. Nor should she – it takes a certain kind of talent to make people forget a Nobel Prize-winning writer and remember you.

One interesting final note: Dylan also wrote an answer song to “Friday” during the Basement Tapes jam sessions, called “Silent Weekend.” The story of a painful morning after or two, it shows Dylan recognized that “Friday” could be sung by a teenaged girl, and decided to follow that path to its inevitable conclusion. No longer looking forward to the weekend, weekend, the song’s narrator has had to bear witness to a girl celebrating Friday by “rockin’ and a-reelin’ / Head up to ceiling / An’ swinging with some other guys.” She may have been partying, partying in “Friday,” but here “she says it ain’t my party” before “strolling over to the jukebox playin’ deaf and dumb” and leaving Dylan to mutter, “Oh Lord, I sure wish Monday would come.” Unlike “Friday,” “Silent Weekend” saw an official release, on Volume 11 of Dylan’s Bootleg Series – a volume notably released after the whole “Friday” kerfuffle had settled down. It’s fairly evident that the interest in “Friday” led to the sequel seeing the light of day.

And a happy April Fool’s day to you too!