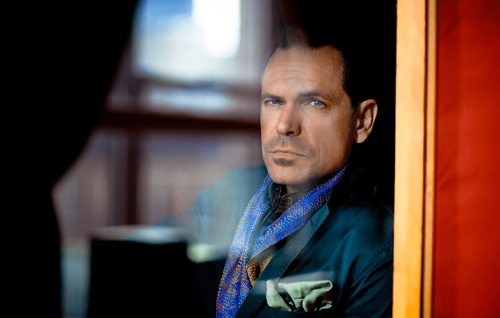 In the opening minute of Kurt Elling’s cover of Bob Dylan’s anthem “A Hard Rain’s a-Gonna Fall,” the jazz singer turns the lyrics into a spoken-word sermon. Without any accompaniment, he fully enunciates each line, then pauses, allowing time to process each haunting phrase of Dylan’s prose. He also reconfigures the order of the song, combining the first verse with the fourth, jumping from “I’ve been ten thousand miles in the mouth of a graveyard,” straight to, “I met a young child beside a dead pony.”

Elling’s cover is the opening song for his new album The Questions. His “backing band” for the track includes contemporary jazz royalty, saxophonist Branford Marsalis and drummer Jeff “Tain” Watts. The music comes in when Elling reaches the chorus of “And it’s a hard …” For the second section, the band provides Elling with a soft jazz accompaniment, lightening the mood as he sings the second and third verses. Throughout the song, Elling further changes the lyrics, altering the eye color of the metaphorical “blue-eyed son” at the start of each verse, subsequently turning his eyes “green,” “brown,” and “black.

At the halfway point of the eight-minute track, the tempo increases and Marsalis changes the tone with an extended sax solo. As the tune builds, Watts pounds the drums harder and harder as if he’s going to slam right through the skins. It all comes to a head as Elling belts out: “And the executioner’s face is always well hidden.” For the explosive finale, Watts plays on his own, while the piano adds a one-note cadence and Elling sings “It’s a hard,” over and over again. All combined, this makes for a fresh interpretation of a legendary song.

Click here to listen to more covers of “A Hard Rain’s a-Gonna Fall.”