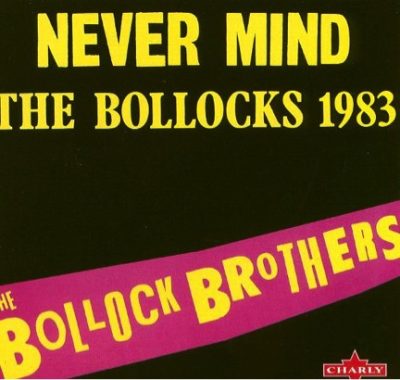 Former DJ and promoter Jock McDonald founded The Bollock Brothers shortly after the Sex Pistols’ demise in 1979. Best known later for an English language cover of French singer Serge Gainsbourg’s “Harley David / Son Of A Bitch,” McDonald thought it would be a great idea to pay tribute to the Pistols on his bands’ second studio album. The album answers the question of what the Sex Pistols would have sounded like as a ‘80s synth and drum machine band. It also proves the indestructible nature of the songs themselves – if they can withstand this saucy interpretation, they can – as you’ll see – withstand anything.

Although you wouldn’t know it, four of the twelve tracks were recorded live. The production and arrangements are vintage low-budget ‘80s new wave. Two oddities worth mentioning: on “Submission,” McDonald includes a brief lyrical nod to Malcolm McLaren’s “Buffalo Gals” – released a year earlier – when he deadpans “three mermaid boys go in the inside.” And in a musical non sequitur, “Liar” opens with a synth imitation of the Rolling Stones’ “(I Can’t Get No) Satisfaction” riff (a nod to Devo’s ‘78 effort perhaps) that recurs throughout the song.

The iTunes review put it this way: “The album should be a one-joke novelty, but it’s actually more entertaining than it has any right to be.” Beyond that, it’s reportedly been given John Lydon’s seal of approval, which has to count for something.

In a masterstroke of weird publicity hunting, McDonald enlisted the vocal “styling” of one Michael Fagan on the album. Fagan, who Trouser Press called “a headcase once arrested for sneaking into Buckingham Palace” (specifically, into Queen Elizabeth II’s bedroom in 1982) appears on the track below.

The entire album can be heard on YouTube here. 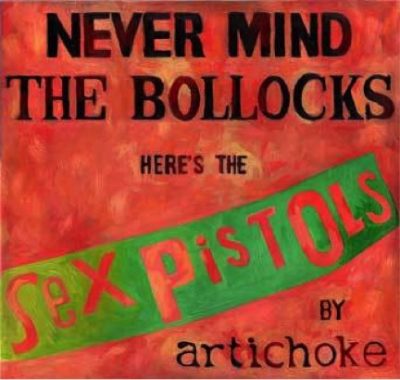 As singer/songwriter/musician, Sellers is the Robyn Hitchcock-influenced driving force of the band who’s catalog now consists of eleven releases. About their 2006 Bollocks tribute album, he writes:

We invented melodies where there were none, frequently changed time signatures from the originals, and played all the songs with acoustic instruments. Some old punks laughed, some were dismayed. And yes, I paid the people at Harry Fox for the rights.

The arrangements are sing-songy folk with minimal instrumentation and bare electronic effects. Sellers and singer Ema Tuennerman provide the vocals. The disturbing “Bodies” becomes a simple ukulele-based strum-along, juxtaposed with a few power guitar chords added to the choruses. “God Save The Queen” slips in some kazoo accompaniment for the heck of it. “Anarchy in the UK” leads off with the sound of bleating sheep, a trumpet, and handclaps then rounds out with a few New Orleans-styled brass breaks. “Pretty Vacant” (below) brings back the ukulele and adds in Gerry Porter’s snare drum brush sweeps. The whole thing wraps up in a leaving-you-wanting-more 32 minutes.

All of Artichoke’s albums, including their newest nearly-all-covers release can be found on the band’s website. 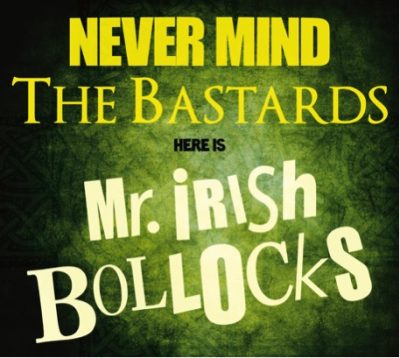 Mr. Irish Bastard don’t hail from Ireland, but rather bring their high-energy Irish/Celtic folk punk from Münster, Germany. With their guitars, heavy drums, mandolins, and banjos, US audiences will have no problem comparing this “Fine Irish Drinking Music” to Dropkick Murphys and Flogging Molly.

Their 2011 Bollocks set is a relentless Celtic punk rock assault from start to finish. The arrangements are well produced, the musicianship solid, and lead singer The Irish Bastard (Himself) shouts enthusiastically in English with nary an accent. “God Save the Queen,” “Anarchy in the UK,” and “Submission” all add a rocking brass section to the album’s ubiquitous tin whistle. Those horns (sax, trumpet, trombone) are especially forward in “Problems” (below) and might conjure up a sonic image of what Bobby Keys and Jim Price did for “Bitch,” the Rolling Stones’ classic track. “Pretty Vacant” features prominent accordion and rock guitar.

We have to agree with at least one Celtic Punk music critic who wrote, “It takes real balls to cover the Sex Pistols platinum selling album in its entirety… It has to be said they did a mighty job of adding a Celtic / folk twist to some of the world’s best-selling punk tunes.”

Get the latest on Mr. Irish Bastard from their website.

Less serious and more novelty are Roma Music Group’s popular Music Box Mania and Twinkle Twinkle Little Rock Star series. Both deconstruct the entire album into soothing instrumental music box and lullaby versions respectively. There might be irony in the fact that the abortion songs “Bodies” appears as the most popular iTunes track on the lullaby version. The albums were released in 2015.

Then there is this oddity. Martin Atkins – session drummer, known for work in Public Image Ltd, Pigface, Nine Inch Nails and more – teamed up beginning in 2000 with a few of those bandmates plus Julian Beeston (ex-Nitzer Ebb) to form a side project named Opium Jukebox which recorded four albums. The concept group recorded Bhangra style – “easternized” music with sitars and tablas – punk and new wave covers along with tributes to The Rolling Stones and Black Sabbath. For their nine-track 2002 album Never Mind The Bhangra A Sex Pistols Tribute they cover seven of the original twelve “Bollocks” tracks and add an alternate version of “Anarchy” and Sid Vicious’ “My Way.” The listening experience will leave you feeling like you’ve been left in a hazy smoke-filled den. The songs aren’t covers as much as they are loosely based replicas of the originals. The musical production is legitimate. As for the band, one Amazon reviewer summed it up this way, “I think Opium Jukebox have done for punk what Pat Boone did for heavy metal. Take that as you will…”

Next Up – The singles: Parts III-VI of the series will look at the many covers of each single released from Never Mind The Bollocks Here’s The Sex Pistols.