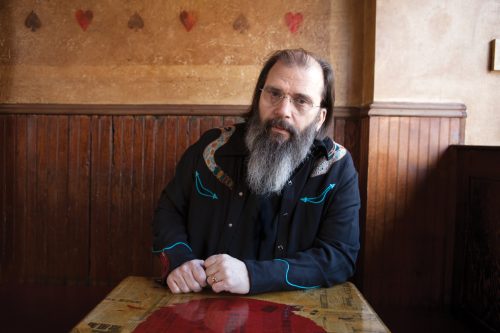 But it’s his birthday, so we’ll let him take a well-earned break. Instead, we’ve rounded up our favorite covers of other people doing his songs. His recordings make ideal cover sources in the same way Bob Dylan’s or Tom Waits’ do: brilliant songs delivered by limited-appeal voices. It’s no surprise that “better” (or at least less divisive) country singers cover Earle constantly; Emmylou Harris alone has covered a half dozen of his songs. So we’ll start there.

“If you’re a songwriter, you always wanted her to record one of your songs,” Earle said of Harris in 2015. Even better if she records a bunch. Just last year, in fact, she debuted a beautiful take on Earle’s 1999 bluegrass song “Pilgrim” on Colbert. But arguably the best – and competition is stiff – is her version of Earle’s “Goodbye,” included on her seminal 1995 album Wrecking Ball. Earle himself plays guitar on her cover, so he couldn’t have been too annoyed when she beat him for the “Best Contemporary Folk Album” Grammy the next year.

As we noted in the intro, Earle and Colvin recorded a duets album in 2016. It included some covers along with duet versions of each of their own songs. “Someday” seems like just one more on paper, but the backstory made it the most important of the bunch. Earle said when I saw him in concert a few years ago that Colvin’s original 1994 cover came out when he was at his lowest, either in jail or just out of it. Hearing someone he was such a fan of sing one of his songs so well boosted his spirits and helped his recovery. Plenty of great Steve Earle covers out there, but perhaps none more significant to the man himself.

Emmylou, Shawn, and now Joan – Steve Earle has a history of working with the women who cover him. In this case, Earle produced and wrote songs for Baez’s 2008 album Day After Tomorrow. “Jericho Road” is a cover, though, since he’d already released it himself the previous year. But despite the man himself looking over her shoulder, Baez’s version is very different, an a cappella gospel number channeling chain gangs and a whole heap of hard history. Also worth a listen: her cover of “Christmas in Washington” a few years prior.

I first discovered Earle through 2007’s Washington Square Serenade, an underrated, or at least underheard, album. So even though it’s not as well-known as Copperhead Road or Guitar Town, I’m pleased that artists keep going back to that album for covers. “Jericho Road” comes from there, as does “Days Aren’t Long Enough.” Dutch singer Ricky Koole released this fantastic version last year with local band Ocobar.

Most Steve Earle covers fall loosely into country/Americana lanes – but not all. This scorching cowpunk version of 1997 deep cut “Here I Am” roars in a way his own recordings never do, offering a template for more genre-jumping covers we hope are coming down the pike.

The Highwaymen – Johnny Cash, Waylon Jennings, Kris Kristofferson, Willie Nelson – covered “Devil’s Right Hand” on their high-profile third album. It’s big and brassy, but I prefer the solo Cash released posthumously on his American Recordings outtakes set Unearthed. Accompanied only by a raw and dirty electric guitar, Cash growls through the lyrics. It sounds way more like the devil than the Highwaymen ever did.

You might not like this cover. I’m not sure I do myself. But I’m glad it exists. So many Steve Earle covers come from his peers. This is one of the few bringing Earle’s songs to a younger (much younger) audience. It translates the song to the massively popular new genre of country-rap – “hick hop” to its detractors – with loud guitars, a lot of attitude, and a guest rap from the genre star Colt Ford. It’s the only song on here that would stand a chance on country radio now. So even if it’s not your thing, it shows that Earle’s songs have plenty to offer to young musicians, not just the traditional old guard.

On their terrific 2000 covers album Up Above My Head, the Wood Brothers don’t cover the Junior Parker standard “Mystery Train,” but dig deeper into Earle’s self-penned sequel. Backed by only upright bass and searing electric guitar (sounds like the same player from that Cash cover), the Brothers hoot and holler through a guttural cover that knocks you between the eyes.

Steve Earle was born in Virginia, grew up in Texas, and moved to Nashville to start his career. His connection to Ireland is, shall we say, limited. So what beautiful irony that he wrote one of the biggest Irish songs in recent years, a song that has become a new standard over there. Mundy’s recent cover with Sharon Shannon (who joined Earle on the original) is one of the top ten best-selling singles in Irish chart history, after topping the sales charts two years in a row in 2007 and 2008. It sounds like a traditional song that’s been around for decades.

No surprise that Levon would choose one of Earle’s bluegrass songs to cover. No surprise, either, that he would do it so well. He recorded this for his acclaimed 2007 comeback album Dirt Farmer. It sits there surrounded by old-as-the-hills folk and blues chestnuts, and fits in perfectly.

Not enough? Check out more Steve Earle covers in the archives.

2 Responses to “They Say It’s Your Birthday: Steve Earle”