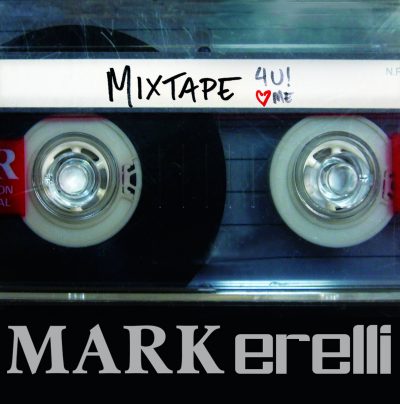 Although he has a healthy and extensive repertoire of his own songs, covers are very much also his stock in trade, as a visit to his website soon reveals, with a monthly free download of the month – often a cover – unavailable elsewhere. (As I write his excellent version of “Midnight Rider” is serenading me, the January freebie.) He also performs an annual series of shows entitled ‘Under the Covers’ – sadly in the wrong continent for this writer to ever catch.

So whither Mixtape? Funded through Kickstarter, the idea was based on requests to duplicate the content of his cover shows. Plus, it seems that he, as I, was an aficionado of making cassettes for his friends, collating together favored songs to commemorate anything from a birthday to a car journey. Some such tapes went further and attached a brief explanation behind the selection, and Erelli does this here, explaining why each song was chosen. And it is certainly an eclectic mix, ranging from Phil Collins to the Grateful Dead, from Roy Orbison to Richard Thompson, catching Neko Case and Arcade Fire on the journey. No Dylan, no Cohen, no Mitchell, no harm. Varying between sparse solo fare on piano or guitar and live band hoedowns, there is sufficient variation to escape the vanity project appeal that taints some such similar outings.

Highlights include the opener “Brokedown Palace” a stately hymnal version that reminds, if needed, the classic(al) roots to Jerry Garcia’s songwriting. Launching then straight into a slowed and electric piano led “Boys of Summer,” offset by a wonderful loping beat. A song difficult to cover well, he nails it. I confess then a slight lull in proceedings, his awe of Richard Thompson evident with an overly faithful and reverent “Feel So Good” before a rollicking Basement Tapes style “Ophelia” hauls us back on track. End of side one – if you forgive the cassette conceit – comes that eternal cover problem, when the new version mostly reminds more how great the original was. If Phil Collins is down on his acclaim these days, Erelli’s take on “Against All Odds” could give its boost. ‘Cause it ain’t a patch on it.

Side two represents the lesser-known songs. And maybe that is the problem. Each of them, as in the Collins above, mostly showcase the excellence of the original. “Deep Red Bells” is a terrific song, as is “Tony” – but mainly in the hands of their respective authors, Neko Case and Patty Griffin. Is it that Erelli’s slighter tenor voice cannot compete with these two especially powerful female voices? Tellingly, these are the only two songs where he offers a change of gender in the singer. Erelli next throws everything, including the kitchen sink, into Arcade Fire’s “My Body is a Cage,” forgetting they had an entire plumber’s warehouse on display anyway.

Finally, like in the Thompson track, he admits he tries to emulate the Big O in “Crying,” delivering, sadly, only karaoke. On the flip side of this, though, comes a tremendous evocation of Solomon Burke’s showstopper “Don’t Give up on Me.” Erelli’s blurb states this began life as a party trick: weedy (sorry!) white boy sings soul legend. A glorious song anyway, and buoyed by soaring and sweeping organ fills, this trick could have fallen flat. It doesn’t, and does him credit for way more than just the chutzpah of attempting it.

So this is a cassette (sic) of two sides, one uplifting and celebratory, one somewhat muted and mischosen. Would I buy it? I think yes, the plusses outweighing the minuses, and it is important to keep the Erellis of this world on the road. Live this would be one hell of a show.