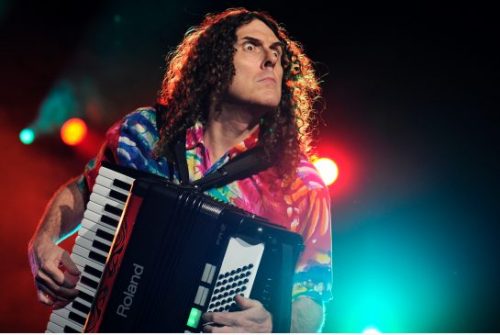 Master of oddball radio Dr. Demento is largely credited with popularizing “Weird Al” Yankovic by being the first DJ to play his music on the radio. The Weird One recently returned the favor by recording an accordion-driven cover of the the Ramones’ “Beat on the Brat” for Dr. Demento’s upcoming Covered in Punk compilation, the second single from that compilation after William Shatner’s version of the Cramps’ “Garbageman”.

Just to be clear, Al’s “Beat on the Brat” is not a parody. Though to be fair, the refrain to the original is so ridiculous that it might as well be a joke. The same could be said for most of the Ramones’ catalogue. For this version, “Weird Al” is backed by punk-rock supergroup Osaka Popstar, which recorded its own version in 2008.

While known primarily for his parodies, as our editor-in-chief Ray Padgett recently noted in his book Cover Me, “Weird Al” got his start playing accordion-powered cover songs in college. Throughout his career, he has continued to record and perform polka melodies of contemporary pop songs. With this version of “Beat on the Brat,” he essentially went back to his roots, recording a straight-forward rendition of the song with a solid Joey Ramone impression. He plays his accordion all over the tune, making it sound like a “Weird Al” track in spirit, if not totally in practice. Contemporary punk rockers would do well to follow suit. Punk has become so clichéd in recent years, if anything, the genre could use more accordion.