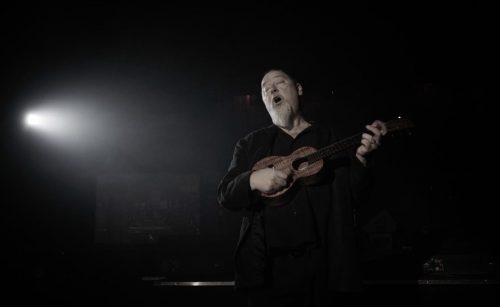 Russell’s latest cover flips the “Gin and Juice” script in two ways: it hasn’t gone viral – or even been widely released – but he actually earned some money from it. It’s a solo ukulele take on Queen’s “Fat Bottomed Girls” recorded under his new performing name Shinyribs. He taped it last year to celebrate New Belgium Brewery’s 25th anniversary, but director Mike Woolf says it was rarely seen because the brewery never put the films online.

New Belgium gave all the film makers the theme “1991” (the year the company was founded) to work with, so Woolf decided to honor Freddie Mercury’s death that year. “We asked our longtime collaborator Kevin Russell how he felt about covering Freddie Mercury,” Woolf says. “He didn’t respond with a yes or a no, but rather a heart-wrenchingly, hollering iPhone demo of this song – just his voice and ukulele.”

Watch Shinyribs’ “Fat Bottomed Girls” below. The performance is simple and stripped-down, but the gorgeous film by Beef and Pie Productions is anything but.