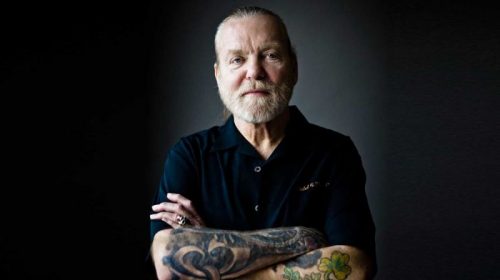 The histories of the Grateful Dead and the Allman Brothers Band have long been intertwined. The two bands shared the stage numerous times in the 1970s. They covered some of the same songs over the years. Heck, they even shared members, with singer/guitarist Warren Haynes and bassist Oteil Burbridge both playing with the Allmans and various latter-day Dead spinoffs.

Gregg Allman adds a new chapter to this legacy with his cover of the Dead’s “Black Muddy River” on his posthumous studio album Southern Blood. Written by Jerry Garcia and Robert Hunter, the history of “Black Muddy River” runs deep through Deadhead lore. The tune is a dark elegy, filled with longing for times past, but with maybe a bit of hope in the end. In Blair Jackson’s 1995 biography Garcia: An American Life, Hunter said that the song “is about the perspective of age and making a decision about the necessity of living in spite of a rough time and the ravages of anything else that’s going to come at you.”

“Black Muddy River” was the closing track on the Grateful Dead’s surprise 1987 commercial breakthrough studio album In the Dark. The song holds the distinction of being the Dead’s last tune with Garcia singing lead during his final show in 1995 at Soldier Field. It would have been the last song Garcia ever performed had Phil Lesh not decided to add “Box of Rain” to the encore at the last minute. “I couldn’t stand the thought of ending the tour with one of Jerry’s most sorrowful songs,” Lesh wrote in his 2005 autobiography.

Allman, for his part, completely reinvents the song by playing it with an upbeat, country feel. He combines this with a full onslaught of horns and a gospel choir to give the chorus a sense of joyful release — a jam band funeral march. Allman’s voice is in fine form and with this song he reinforces the connection between himself and Jerry. Not a bad way to go out. “Roll Muddy River,” indeed.