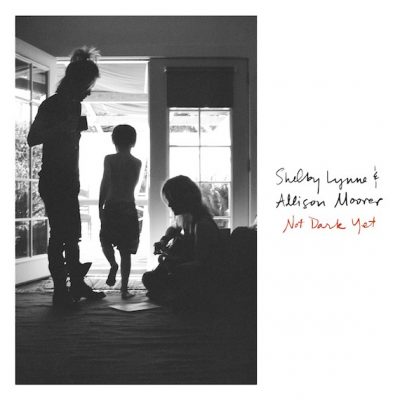 Shelby Lynne and Allison Moorer have released a new record, Not Dark Yet. It has been out a week or two, and I’m surprised this hasn’t yet had much shout here, unless the sole original song discounts the inclusion of this consummate otherwise all-covers showpiece. Neither of the two sisters (for they are) are strangers to a cover, each producing an example within their already expansive repertoires, Shelby with her exquisite reimagining of Dusty Springfield on 2009’s “Just a Little Lovin’,” and Allison with her “Mockingbird” the year before.

Intriguingly, this is their first studio joint performance, although they have appeared together on stage. There is talk of a previous falling out, but if so, it looks as if they have found each other and then some, their voices melding as only kin can. Some commentators have name-checked the Everly Brothers. That is no hyperbole. But this is so much more than a meeting of two voices, the choice of material helping Not Dark Yet rise above the play-it-by-numbers country feast they could have produced in their sleep, not that that couldn’t or wouldn’t have been good. By picking songs by Nick Cave and Kurt Cobain, amongst others, as well as choosing a latter-day Dylan song (the title track), Lynne and Moorer show their chops to be way beyond Nashville. OK, so we have some Townes and some Merle, even the Louvin Brothers, but also, in the opener, a track from the Killers. There is also a track by current golden boy Jason Isbell. It all works, as does the sole self-penned track, by Shelby, outlining their already-well-told childhood domestic chaos.

If that were not enough, the production and arrangements are top notch, thanks to Teddy (son of Richard) Thompson taking the producer’s chair (and not a few background vocals besides). The band for the sessions is a slew of some of the normal culprits for quality product in this vein, Benmont Tech (the Heartbreakers) on swirling keyboards, Doug Pettibone (Lucinda Williams go-to guitarist), and Michael Jerome and Taras Prodaniuk, from Teddy’s dad’s band. The sound is magnificent, complementing the vocals, aiding and abetting this essential release.

You can purchase Not Dark Yet on Amazon.

2 Responses to “Review: Shelby Lynne & Allison Moorer, ‘Not Dark Yet’”