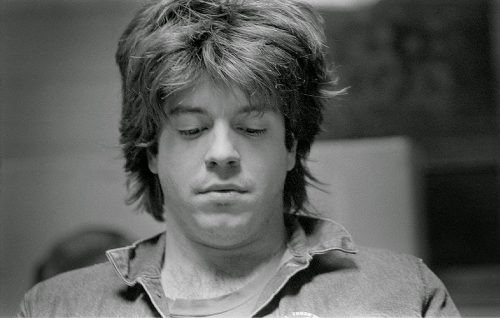 The list of those touched by Hart’s spirit number in the thousands upon thousands – not just the legions of fans who latched onto his songs back in the ’80s, but the musicians who were inspired enough by his work to cover it. What follows are some of those covers – and one cover of Hart’s.

“No Hüsker Dü, no Nirvana,” Dave Grohl once said in an interview, and he’s paid tribute to the band by covering “Never Talking to You Again” live. But Hart was unimpressed, saying in a 2013 interview, “I think they never made too much effort… Honestly, I am glad those fellows are free to do something else.” He may have preferred Elf Power’s cover, which gave the song a martial beat that jacks up the urgency of the kiss-off.

In his review of the Flip Your Wig album, Robert Christgau twigged Hart for going the conventional route in his songwriting, singling out “Green Eyes” (“about beauty never jealousy”) as an example. But there’s a lot to be said for single entendres if the surroundings are worthy enough, and to these ears, Hart’s song certainly qualifies on that score. Green-eyed Claudia Hoyser takes the literal route as well, and what starts out as too-obvious becomes a true beauty.

Not entirely sure why this YouTube video uses Joe Orson’s cover of “Sorry Somehow” as a score for the Betty Boop cartoon Betty in Blunderland. Regardless, his cover picks up tremendous power by being set to a quiet acoustic and a ragged, pained voice. The bitterness of the verses and the confused sadness of the chorus ring out louder and longer when they can’t be swept away by the band.

In his autobiography, Bob Mould called “2541” “one of the best songs he’d ever written.” Hart titled the song after the address of an ex-lover, only realizing after recording it that it was also the address of Hüsker Dü’s offices and rehearsal space. The coincidence added a layer of meaning to the song that doubled down on the sadness involved in ending a relationship. Marshall Crenshaw’s cover provides the song with as much warmth as those big windows that let in the sun.

We’ll let Hart have the last word here, even if the words were originally John and Paul’s. Hüsker Dü never officially released their cover of the Beatles’ “Ticket to Ride,” but it was a live staple. This is how I like to remember Grant Hart – long hair, exuberant smile, drumming and singing a song about the carefree.

The documentary Every Everything: The Music, Life and Times of Grant Hart is available from Amazon.