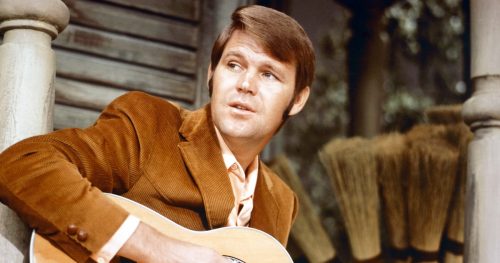 The world lost a quintessentially American artist with the passing of Glen Campbell last week. Dolly Parton called Campbell “one of the greatest voices of all time”, and his incredible career certainly supports her praise. Hits that toed the line between country and pop included “Rhinestone Cowboy”, “Wichita Lineman”, “Gentle on My Mind”, and “Southern Nights.”

Many of those hits were covers, including his most well-known, “Rhinestone Cowboy.” Originally recorded by Larry Weiss, the song made little impact initially, but became an instant hit in the States once Campbell took it up a year later. Campbell’s charming, heartfelt vocals combined with soaring instrumentals perfectly encapsulated the theme:

Certainly, we could all find a song of Campbell’s that has influenced us somehow…either recorded by him, or covered by another artist. For me, it’s “Wichita Lineman.” My first brush with this gorgeous song was in the hands of a cover by James Taylor, who gave it a haunting feeling befitting the subject matter.

Fast forward a few years and you have that moment in Parks and Recreation when Ron Swanson sits atop a telephone pole singing the iconic song.

Looking back on his multitude of incredible hits, Campbell just seemed to understand how to reach people with his music.

“A good song is a good song. A lot of people, they listen to a good song but they ain’t got a hole in their ear. I don’t know where that came from. But the songs that we picked [for Meet Glen Campbell], the country, the rock, the whatever kind of music you say it is, I never really looked at it like that. I looked at it as just being good music. But … people seem to like they wanted to pinhole things, you know, ‘This is country and this one is rock and this one is pop.’ You know, I never looked at music like that. … I just wanted to do it like what the song called for, and people, they make up their own mind whether it’s country, rock, pop or crock.”

Thank you, Glen. For all of the good songs that we have to enjoy.

One Response to “In Memoriam: Glen Campbell”