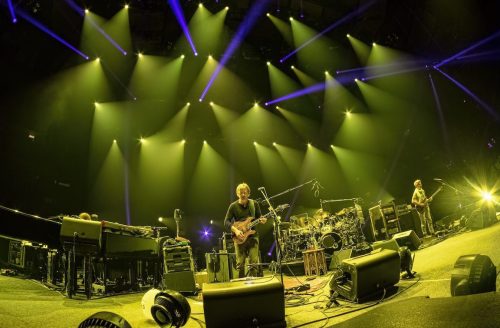 So I’ve ranked all the first-time covers from the past two weeks of Phish’s concerts, below. I’ll admit I’m not a huge fan myself – I once wrote an article defending their home of Burlington, Vermont from its jam-band stereotype – but some of these are among the best performances I’ve heard by them. Others…are not.

Note: We used official videos where available (the ones with the donut thumbnails). Failing that, we used shakier fan-made clips or audio. Great sound and video of all thirteen shows is available at LivePhish.com.

Phish did a number of a cappella covers over the weekend. Though none of the band members are particularly strong singers, on some numbers they found a sort of ragged chemistry. And then there were relative trainwrecks like this. Phish could potentially do a killer Harry Nilsson cover. But not of this song, and not in this arrangement.

It’s a funny video, with drummer Jon Fishman dressed as the Pope to complete the Sunday morning scene. A shame he’s too busy blessing the crowd with incense to sing in tune.

16. “Everything In Its Right Place” (Radiohead cover)

I’d love to hear Phish do a Phish cover of this song. Instead, they basically attempt to mimic Radiohead, mixing electronics and effects and ignoring their traditional instruments. It’s sort of interesting – they’re clearly adept the technology required to pull this off – but I’d rather hear what they could do with it as a rock song.

Their a cappella “Strawberry Fields Forever” fares better than “Coconut” did, but still doesn’t quite gel. They’d get the a cappella thing down by the end of the run, but were still struggling at show #2.

Phish actually did play this once before – but that was on New Years Eve 1998, when every band in the world covered “1999,” so we’ll count this one as new. Maybe it’s the mix and I shouldn’t blame the band, but that synth riff – exciting on Prince’s original – is so aggressively in your face here that I began to despise it by the end.

An ably-done Jimi Hendrix cover with some nice guitar licks from Anastasio, but it’s hard to say it adds anything to the original. Sounds like an unusually talented local band playing the 1 PM slot at your local blues-rock waterfront festival.

This barely counts – it’s only 32 seconds of solo piano by Page McConnell. Say this for it though, unlike some other Phish songs, it certainly doesn’t wear out its welcome!

A group of guys with iffy voices covering a band best known for sounding angelic is risky. Performing that cover a cappella, even more so. They do better than you might expect actually. Though Fleet Foxes have a song called “Ragged Wood,” there has never been anything remotely ragged about that band. “Ragged wood” works as a descriptor of Phiah’s version though – grainy and amateurish, but heartfelt. Fleet Foxes responded a couple nights later with a Phish cover.

Phish’s version of the Shuggie Otis song the Brothers Johnson made into a hit in 1977 hits a quick funk groove early on that powers it through even a pretty wobbly guitar-riff section.

9. “See That My Grave Is Kept Clean” (Blind Lemon Jefferson)

Prog lovers Phish are less steeped in blues history than, say, the Grateful Dead. That shows a bit here, but they manage a relatively able cover of the Blind Lemon Jefferson classic.

The most surprising pick of the bunch, Phish resurrects one of the first viral music videos: “Chocolate Rain” by Tay Zonday (114 million views and counting). Their cover certainly earns bonus points for novelty, and stripped of the cheesy production and Zonday’s insanely low voice, the song actually proves pretty listenable.

Burlington, Vermont is less than an hour from the Canadian border, so no doubt they were quite familiar with this number. What Hendrix did for the Star-Spangled Banner, Anastasio does for “O Canada.”

The last time I saw Neil Young play this, he jammed it out to near ten minutes. So it comes at somewhat of a surprise that an actual jam band’s version would wrap at six. Still, Neil Young is right in their wheelhouse (they also covered “Cinnamon Girl” on this run), loose enough to play around with but demanding enough of a template to keep them on task. The band’s background harmonies are on point too.

The most powerful and moving of the a cappella numbers – despite a Christmas song’s inexplicable presence during an August concert. If Phish come caroling, don’t slam your door.

Phish opened the thirteen-night run with one of the most surprising covers they played, of short-lived Danish pop duo Junior Senior. The number infused the run with a burst of focused energy, the band at their tightest. Arguably the most sheer-fun performance of the whole bunch.

The one song of the bunch they really jam the hell out of, Hot Chocolate’s hit “You Sexy Thing” has a strong enough groove that things stay enjoyable well past the ten-minute mark. Trading solos and riffs that circle into weird psychedelia, they take this ridiculous song more seriously than it probably deserves.

2. “Sunshine of Your Feeling” (Cream/Boston medley)

Easily the most ambitious cover of the shows, “Sunshine of Your Feeling” is a medley of Cream’s “Sunshine of Your Love” and Boston’s “More Than a Feeling.” But as if that wasn’t enough, they also work in Cream’s “White Room” and “Tales of Brave Ulysses,” plus Boston’s “Foreplay/Long Time.” The concept is totally forced – the donut flavor that night was Boston Cream, the only obvious reason to connect these two bands – but they make it work in an epic medley. At the end, one of the band members says, “We’ve been waiting to do that joke for twenty years!”

The Wire had a different artist cover Tom Waits’ “Way Down in the Hole” for every season’s theme song (Tom’s own original soundtracked season two). In the era of the endless television revival, there’s no saying The Wire won’t return at some point. If it ever does, this fantastic version should be season six’s theme.