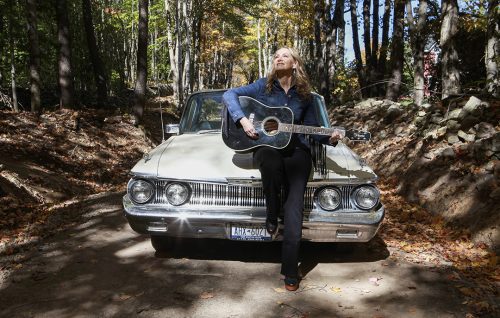 Judging by album sales, more people have probably heard Joan Osborne’s cover of “Man in the Long Black Coat” – on her 1995 triple-platinum debut Relish, aka the album with “One of Us” – than ever heard Bob Dylan’s original (Oh Mercy hasn’t even gone Gold after almost 30 years). And though she gets tarred with the one-hit-wonder brush due to plaintively wondering what if God was one of us (a song whose history we dug into recently), she’s always been a fine song interpreter even when flying farther under the industry radar. Now, after a strong soul-covers album in 2008’s Bring It On Home, she’s bringing it all back home with a full-length Dylan tribute: Songs of Bob Dylan.

Like “Man in the Long Black Coat,” deep cuts and newer songs make up a number of the albums songs (“Tryin’ to Get to Heaven,” “High Water (For Charley Patton)”). But the first single is a classic, “Tangled Up in Blue.”

Many have covered “Tangled Up in Blue” over the years, but few hold a claim Osborne does: She has sung it with Bob himself, when she was touring as part of The Dead in 2003 and he joined them onstage for a few songs. (You can hear it at archive.org)

Osborne’s new recorded version is, not surprisingly, slightly less shambolic than that live recording. She told Rolling Stone how it came about:

It wasn’t until later in the process that I started to think about doing “Tangled Up in Blue,” during rehearsals for the residency we were doing at Cafe Carlyle. We started off with just the drums and began experimenting with more of a soul rhythm. We ended up listening to Dusty Springfield’s Dusty in Memphis, some of the classic Memphis recordings of that time, to see if we could flavor the Dylan song with some of that stuff. It’s a very lengthy song, and that’s why people tend to do it at this rapid-fire pace, to get this epic story out there, but I wanted something that would put a different spin on it. I wanted to give it a more feminist spin, a different kind of energy.

Listen to Osborne’s “Tangled Up in Blue” below.