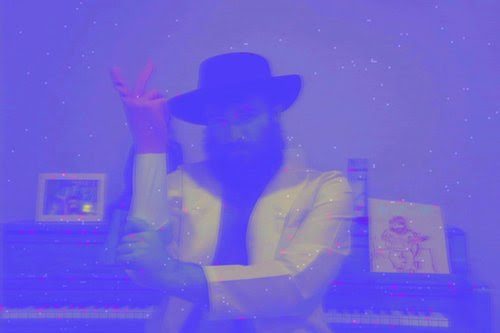 “Unique” is an overused word, so when a press blurb landed plugging an “incredibly unique cover album,” we were skeptical. But if ever something deserved to be called “unique,” a collection of avant-garde jazz covers of Blink-182’s massive 1999 album Enema of the State is it.

Bassist Benjamin Ryan Williams records as B.E.N. so his version is called, naturally, Benema of the State. It’s a concept as dumb and goofy as Blink-182 themselves, but Williams takes the project seriously. Despite appearances, Benema of the State is no novelty album. “The main reason I wanted to [make this record] is because I thought the composition and the melodies are really good,” he said. “It’s to try to recreate the feeling of listening to Blink-182 as a kid, but doing it as an adult playing their music.”

A perfect example is his way-out-there version of one of Blink’s biggest hits, “All the Small Things.” Like most Blink songs, the original version is short and snappy, coming in under three minutes. B.E.N.’s version, on the other hand, nearly tops ten. And if you didn’t know the concept going in, you might make it a ways before you realize what you were listening to.

“All The Small Things” is one of the more powerful melodies of my childhood; hilarious I know considering that Blink-182 had such sophomoric humor, but I think its a tune that is pretty indicative of my personality/approach to making music. It is bursting with energy and (perhaps misguided but who cares) optimism. This particular rendition of the tune ends up being fairly long because of the ending. On Blink’s original recording, there is a false ending where the lyric goes “the night will go on, the night will go on, my little windmill.” So Blink repeats “the night will go on” twice and B.E.N repeats “the night will go on” 182 times. I thought this would be a joke that Blink would appreciate. Also something something about how this particular music they created will go on forever in terms of its influence on an entire generation of songwriters, musicians, skaters, and American Pie fans (first two films only).

Listen to B.E.N.’s “All the Small Things” exclusively below. The full Benema of the State record drops tomorrow.