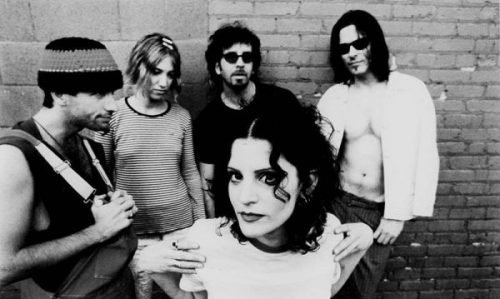 Anne Preven and Scott Cutler joined forces in 1993 to form Ednaswap, an LA band that got signed to a record contract on the strength of a short acoustic set they’d performed in Cutler’s living room. Their self-titled first album subsequently had a lot of filler, but it also had “Torn,” which Preven and Cutler co-wrote with producer and (briefly) Cure bassist Phil Thornalley.

Their label was dissatisfied with the release; after hearing Ednaswap’s living room set, Elektra/EastWest was expecting an acoustic folk album, not the poppier version they were given. They didn’t promote the record, and Preven claimed that “they wouldn’t even let us tour.” It was a short step to being released from their contract and being signed to Island Records. There, they recorded their second album, Wacko Magneto. It featured a thoroughly reworked version of “Torn,” slowed down to a painful near-dirge, the first couple of minutes sung to naught but distorted guitar. The pain is right up front, and the song’s power is chilling and unmistakable.

Indeed, “Torn” had already gotten quite a bit of attention over the years, as industry people recognized its potential and tried to find the key. The first version actually came out two years before Ednaswap’s recording, performed by Danish singer Lis Sørensen as “Braendt” (“Burned”), and a Norwegian singer named Trine Rein recorded her cover of it in 1996 for her album Beneath the Skin. But Island was convinced that Ednaswap had cracked the song’s code, and prepared to release it as the album’s second single.

Thornalley was working with an Australian actress named Natalie Imbruglia, who was starting a singing career three years after leaving the soap opera Neighbours. His publisher had introduced the two of them, suggesting they record “Torn” together for her debut album Left of the Middle. That they did, resulting in the global smash the song had been insisting it was for almost five years.

Spin magazine called it “that very nearly perfect pop specimen, a breakup song teenage girls instantly adore and the rest of us pretend to hate until we realize we haven’t stopped humming it.” They also pointed out the difference between Ednaswap’s version and Imbruglia’s: “Preven’s ‘Torn’ is a full-on grunge ballad, all wails and ache, and when Preven sings that she is torn, she sounds like she is torn as in ripped wide open, exposed and bleeding – as opposed to torn between staying and going, which is how Imbruglia sings it.”

Its success also meant that Island could no longer put out Ednaswap’s version of the song as a single, as it would come across as riding the coattails of a hot hit and reek of unoriginality. Never mind that the song’s co-writers were actually in Ednaswap – perception, in the music biz and elsewhere, is reality.

So Island lost out on massive royalties that would have helped them out of the considerable financial difficulties they later encountered. Ednaswap recorded only one more album before dissolving, and while Imbruglia has recorded four more albums (the most recent, 2015’s Male, an all-covers album), she’s not re-attained the peak she found with “Torn.” But if Preven and Cutler’s band missed the brass ring by the barest of margins, they did use some of the money they made from the song (and with Left of the Middle selling 7 million copies, that wasn’t chicken feed) to found Pulse, a music management and publishing company designed as “a sanctuary (both metaphorically and literally) where their songwriters, producers and artists are free to reach and exceed their full potential.” Who knows? Even as we speak, they might be shepherding the next “Torn” to full fruition.

You can get the original Ednaswap recordings of “Torn” here and here, and Imbruglia’s version, still inescapable after all these years, can be purchased here.