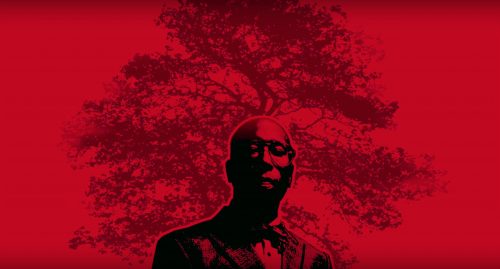 We’ve written about Rhode Island songwriter/producer Gavin Castleton a few times over the years, spotlighting his airy and enjoyable covers of Peter Gabriel, Frank Ocean, and the Twin Peaks theme. But that didn’t prepare us for his newest, a hard-hitting and powerfully charged of Billie Holiday’s harrowing song about lynching, “Strange Fruit.”

One reason for our surprise is that Castleton recruited another Cover Me favorite to sing: Rescue of funk-rock band Bad Rabbits (hear them covering Smashing Pumpkins and Michael Jackson). Rescue delivers one of the most powerful vocals we’ve heard this year, lurching from aggressive pummel to wavering falsetto. And it blends perfectly with Castleton’s thudding electronic production, spare and unrelenting in a way that won’t let you turn away.

We asked Castleton to tell us more about how the song came about:

I started sketching this cover back in late November of 2014, shortly after Officer Darren Wilson was acquitted of the murder of Michael Brown. My friend Dua (aka “Rescue”), front man for the band Bad Rabbits, had been extremely vocal on social media about his frustration with racism and police brutality, so I invited him to sing the lead. I also enlisted the help of my constant collaborator Brian Cass, a synthesis and engineering guru from New Bedford MA. Brian took the somewhat lifeless bass and drums of my early drafts and transformed them into the foreboding zombie pulse that you hear in the published version.

We tried to illustrate the near eruption we were seeing on social media; we wanted the track to sound like it was on the verge of boiling over every 16 bars or so. Brian and I revised the arrangement and production for nearly a year, evolving it from a choppy hip hop remix of Billie Holiday’s original track to a thumping appropriation of Nick Drake’s “River Man” by way of Nine Inch Nails’ Downward Spiral. Dua recut the vocal twice to better compliment the updated arrangements, and we finally landed on something that felt presentable in late 2016 or so. We had very much hoped to make a compelling music video for it, but when officer Jeronimo Yanez was excused for the murder of Philando Castile, we couldn’t really sit on it anymore.

It’s a small and safe thing, using music as a political statement, but at a time when we feel utterly powerless to fix what is so clearly broken with our country, any action at all feels like progress.