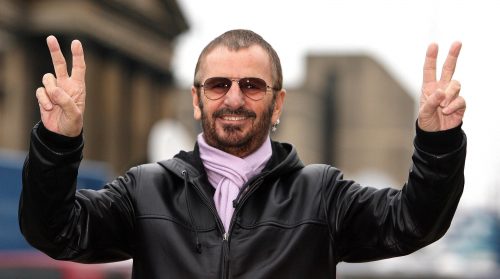 Hamburg, Germany, wasn’t just the place where the Beatles put in so much hard work to become the Beatles – it was also the birthplace of the Punkles, a tribute band that played Beatles songs in Ramones fashion. Like the Ramones, the band members took on noms de punk – “Octopus’s Garden” is performed by none other than Markey Starkey.

Bettye Lavette’s Interpretations: The British Rock Songbook featured the soul singer putting her own stamp on thirteen songs from the UK, proving against all odds that classic-rock radio hadn’t ossified them yet. Allmusic.com called her take on Ringo’s “It Don’t Come Easy” “swampy, haunting, and profoundly wise.”

You’ll have to excuse the disconcerting animation to this video, but it’s the only way we can listen to soul-rock belter Maggie Bell roaring through “Oh My My.” She neatly excises any innate novelty and makes the song mean more than it had. Close your eyes and/to enjoy.

“You Never Know” is a song that you might never know, unless you were a fan of the 1991 movie Curly Sue, which featured Ringo singing this on the soundtrack. Maki Lam, who has a Soundcloud page under the name makiaea, gives the song a vocal-only treatment that wouldn’t sound out of place on a Magnetic Fields album.

Ringo Starr – When You Wish Upon a Star (Cliff Edwards cover)

1988’s Stay Awake: Various Interpretations of Music from Vintage Disney Films was one of the earliest tribute albums, and one of the best – among other things, it brought together Bonnie Raitt and Don Was for her version of Dumbo‘s “Baby Mine,” paving the way for their teaming up for Raitt’s Nick of Time breakthrough. The album closed with Ringo’s cover of “When You Wish Upon a Star” from Pinocchio, featuring a trumpet solo by Herb Alpert. No wink-winks about the star/Starr pun here; Ringo could easily be singing this from experience, and even if he doesn’t have Jiminy Cricket’s vocal range, he brings the point home wonderfully.

Get all your Ringo news from www.ringostarr.com.