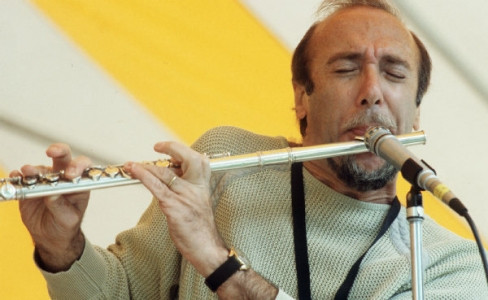 Say the words “jazz flute” to a casual music fan, and two people are likely to come to mind: Jethro Tull’s Ian Anderson and Anchorman’s Ron Burgundy. There’s one man they really need to add to that small category – or, to be more accurate, one Mann…

Jazz aficionados need no introduction to Herbie Mann. He started out as a bop flutist in the ’50s, became a world music pioneer with his use of African and Brazilian themes in the ’60s, and then incorporated soul into his sound in the ’70s, keeping his career alive in an era when jazz was on the decline. Throughout, he locked into the groove of songs, spinning out covers that lasted ten times longer than the originals and playing with plenty of top talent (he helped give Chick Corea his start). His commercial success meant that he was often accused of selling out by his critics – he once called himself “the Kenny G of the sixties” – but another colleague put it better by describing him as “a guy who loved music of all kinds and [was] eager to explore it all . . . a wonderful Pied Piper of jazz, drawing our attention to what’s happening around the world.”

Mann had a knack for reinventing rock songs in a way the original artists might never have imagined. Witness the following…

Mann covered “What’d I Say” on 1971’s Push Push, which featured both Duane Allman and one of the most notorious jazz album covers ever. But that wasn’t the first time he’d covered it – 1965’s Latin Mann (subtitled “Afro to Bossa to Blues”) featured a rendition that deserves an A for effort and for execution.

The 1968 live album The Wailing Dervishes saw Mann getting to turn loose before an audience, and does he ever do so. He takes on the Beatles, as was required by every artist of the ’60s, but does so in a truly unique way, lighting a fire by bringing jazz and the Middle East to “Norwegian Wood.” Isn’t it good? P.S. His 1970 cover of “Come Together” is also required listening.

Memphis Underground (1969) was Mann’s most commercially successful album, and it won a lifetime fan in Hunter S. Thompson, who called it the best album of the ’60s. “Hold On I’m Coming” featured guitarist Sonny Sharrock, so the song diverted from its Sam and Dave roots in multiple ways.

1974’s London Underground was more rock than soul, covering the Beatles, Donovan, and Derek and the Dominoes, among others, and featuring guitarist Mick Taylor. The album kicks off with a cover of “Bitch” by the Rolling Stones; I’d like to think it got Taylor to smile when he listened to it for the first time.

“That’s baby-making music, that’s what that is.” Truer words were never spoke. Of course, Ron Burgundy was speaking them about himself, but if he’d been talking about Mann’s version of Otis Redding’s “I’ve Been Loving You Too Long,” on his 1972 album Mississippi Gambler, he would’ve been hitting a lot closer to the mark.