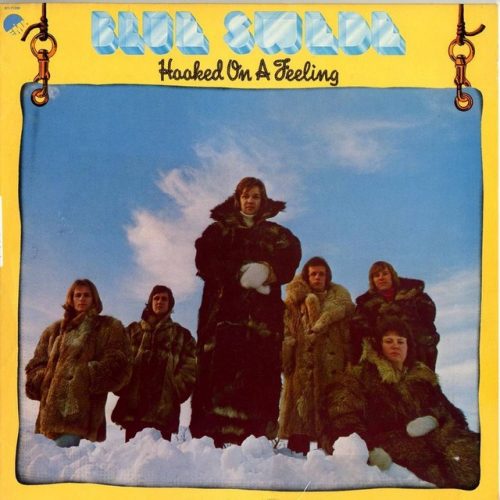 Here’s the thing – many of 1974’s listeners were among the 1969 listeners who put the original version of “Hooked on a Feeling” in the top five in America. How quickly we forget, eh? Well, no – it’s more like, how quickly we adjust to a new reality.

In 1968, B.J. Thomas was on the rise. He had one million-seller under his belt, with his cover of Hank Williams’ “I’m So Lonesome I Could Cry,” and was a year away from his smash hit “Raindrops Keep Fallin’ on My Head.” This was the year that he recorded “Hooked on a Feeling,” a song written by Mark James (who also wrote cover favorites “Suspicious Minds” and “Always on My Mind”) about his childhood sweetheart and future wife. With its country-pop sound and slightly dated but catchy electronic sitar hook, “Hooked on a Feeling” made its way into Billboard‘s top five in January 1969 and smoothed the path for Thomas’s greater success.

Jonathan King was a Brit who had made a name for himself in England – or, to be more accurate, several names. Under various pseudonyms, he would cover various songs that somehow missed the UK charts, doing them in a wholly different style to some success – for an example, check out “It’s the Same Old Song,” done as the Weathermen, with a violin/drum break that’s crying to be sampled. In 1971, he decided to give “Hooked on a Feeling” the reworking treatment. “I wanted to turn it into a pop/reggae track since country was less appreciated in Britain,” he said in his autobiography 70 FFFY. He sang the individual parts into a tape recorder as a demo for his arranger; not knowing how to start the song, he just sang the reggae rhythm, planning to assign instruments to play it later. When he listened back to the demo, he thought the “Ooga chucka oogah oogah” part he’d sung was so compelling that it was worth keeping as sung, rather than played. He also arranged for the instruments not to come in until after the first “I..I…I’m (thud thud)” part, for maximum impact.

The bass player at the session, the legendary Herbie Flowers (Lou Reed’s “Walk on the Wild Side,” Harry Nilsson’s “Jump Into the Fire”) called the arrangement “the most brilliant thing I’ve ever heard.” It did fairly well too, selling over a million copies worldwide, though it didn’t get a whiff of success in America.

A few years later, King got a call from one Bjorn Skifs. Bjorn fronted a Swedish pop/rock band named Blue Swede, and he wanted to know if it would be okay to cover King’s arrangement of “Hooked on a Feeling.” King gave his blessing, thinking little of what money he might get out of it – “A smash in Sweden wouldn’t have put enough petrol in the Rolls to get there,” he later said. At any rate, an arrangement can’t be copywritten, so King wasn’t going to see any money anyway.

Blue Swede amped up the obnoxiousness of the “oogah chuckas” – inspired, in part, by the Beach Boys’ “Do You Like Worms?” – and cut out any drug references, changing “I’ll just stay addicted and hope I can endure” to “I’ll just stay a victim if I can for sure.” Apparently, that was what it took to spell out the difference between a top-five hit and a number one hit. Interestingly, the same week “Hooked on a Feeling” topped the charts, ABBA won the Eurovision song contest with “Waterloo.” They would go on to become the face of ’70s Swedish rock music, and Blue Swede, after two albums half-filled with covers of recent hits, would sink without a trace.

And how do the artists who came before Blue Swede feel about that band’s scooping up all the attention in 1974 and today? “It didn’t bother me,” B.J. Thomas said. “I didn’t write the song. Maybe if I had written it I might have felt differently…. In the long run, it probably even created new interest in my original version.” As for King, who served as the bridge between two big American hits, while admitting to being “mildly annoyed” that he didn’t see a penny for his arrangement of a number one smash, he didn’t seem to think it mattered in the eternal scheme of things. “The joy was, and still is, in making it, doing it, laying the golden eggs,” he said. “Let others scramble them.”

“Hooked on a Feeling” is available from Amazon in versions by B.J. Thomas, Jonathan King, and Blue Swede. And check out Jonathan King’s biographies, written at age 65 and age 70, for stories about discovering Genesis, Rocky Horror, Anne Rice, and MUCH MUCH more.