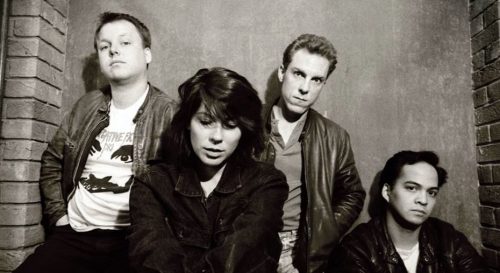 One of the most notable features about “Gigantic” is Deal’s bassline; in searching for covers of the song, I was struck by how many of the artists stripped away that distinctive part in order to affix their own stamp. It’s hard to think of “Gigantic” without that indelible motor, but the folks below didn’t seem to have any trouble…

If you thought OK Go was good for little more than viral videos, think again- they also know how to cover a song and make it their own. Specifically, their cover of “Gigantic” is slower, quieter, haunted, and it stays with you.

Orange had the great misfortune to be an dreampop band in a grunge world. They may not have gotten the attention they merited, but they did get to record a cover of “Gigantic,” described by their label as one “that aches instead of pounds, is lost instead of found.” That opening wash of music will be all you need to know how true that is.

From Correggio, Italy come the Gazebo Penguins, who currently record for the To Lose La Track label. Their cover of “Gigantic” feels like an abstract painting set to an electro beat. The most recognizable vocals are barely audible, and they’re asked to carry the melody; that they do so is just one of this cover’s many small wonders.

The Miserable Rich’s fiery chamber-pop sound found considerable favor in Europe, where they released several albums and toured extensively. A 2009 EP of covers saw them take on “Gigantic,” and they match the Pixies in melodicism, noise, and uplift, all while using instruments more commonly found in a classical setting than a rock one. Quite an accomplishment, that.

Joshua Guthals is a very shy software engineer based in Brooklyn who also performs in/as Kind Monitor. Their cover of “Gigantic” brings the song into the 21st century with more sterile instrumentation, which serves to remove the singer from the subject matter and make him sound lonelier than one might think he should sound under the circumstances. That sense comes across in this video as well.

You can buy Surfer Rosa on Amazon, which also sells Fool the World: The Oral History of a Band Called the Pixies.