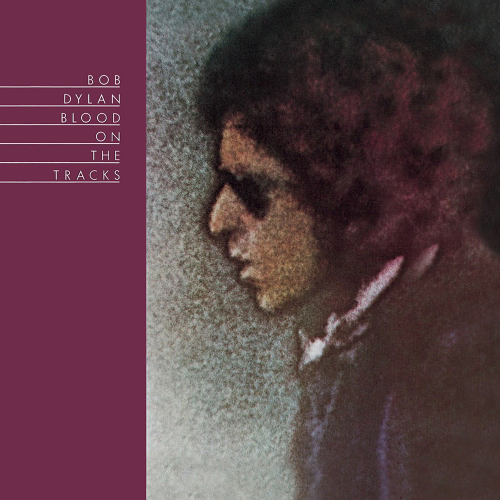 Blood on the Tracks was also my first full immersion in Bob, Greatest Hits not quite counting. See, a pal o’mine had access to discounted CBS recordings, half price if I recall. I had my eye on a witchy boho girl, like me newly arrived at University. She had her eye on my discount and, beyond a serious 40 minutes of otherwise silence, as we listened to my purchase of Blood, a prompted and suggested gift for her, that was that. She thanked me, apologized for giving me the bum’s rush, but she had to go out, you see, with the flash harry further along the corridor. I was so hurt, my emotions imbued by and immersed in Bob’s own heartbreak, that I bought a second copy. Probably full price, too.

There is also a fascinating tale about the fruition of the recording process of Blood on the Tracks, and how several versions of most of the songs exist, some markedly different, some available freely on official outtakes, many others less so. The temptation rose to write up a post of Dylan’s “covers” of the original release, but I felt that may try too hard the legal team here.

And what are they all about? Well, you can believe the author when he says they are based on the stories of Anton Chekov. Or you can believe Jakob, his son, who suggests they represent the sound of “my parents talking.” Be that as it may, Blood on the Tracks is clearly a graphic display of relationship angst, with the headlong rush of sometimes conflicting emotion, from anger to maudlin self-pity and all in-between, so as to be not only a yardstick for Dylan, but also a yardstick for break-up records generally. Whenever a meisterwork of that genre is released, it is always referenced as being “the best of its kind since Blood on the Tracks.” But you’ll notice that it’s almost never described as better.

Thousands if not millions have shed their blood on the tracks of the album, looking to leave their own mark on the work. Some of that blood has stayed. Here are ten covers that could stay with you forever and never realize the time.

Scarcely any great reinvention, KT Tunstall’s 2005 performance of “Tangled Up in Blue” on the UK music showcase Later with Jools Holland makes up for new interpretation by a palpable love and enthusiasm for the song, her husky vocal, huskier than usual, veritably inhabiting the song, one she sounds to have been living in forever. (She also does a mean version of the following track……)

I sometimes wonder whether women do Dylan better? Diana Krall furthers the case with her cover of “Simple Twist of Fate.” Again, a faithful interpretation, the wistful simplicity of the sparse piano is how this raises a sad song into one of despair. I wish Mrs. Costello would do more stuff of this melancholic bent. Short and spare, it just begs an immediate replay to fully appreciate the pain. Can you resist? (As a companion piece, I would have liked to include her husband’s version of track 5 below, from the extended version of Kojak Variety, but it’s not available in the YouTube idiom, alas and alack.)

Sneaking out on the b-side of Scots indie-rockers Travis 2001 hit “Side,” it is uncertain whether this band ever played “You’re a Big Girl Now” live. It is a gentler version than the original, suggesting more a latter-day regret rather than any bitter diatribe. Travis have done many cover versions over their career, a trick missed by their compilers and catalogers, as were these to be collected together on one disc, I would certainly buy it. (You listening out there?)

Always my least favorite track on the album, and many have covered “Idiot Wind” without swaying my opinion. However, the usually excellent Sid Griffin manages it, with this authentic bluegrass take. Over a long career as both singer/bandleader, both of this band and the Long Ryders ahead of that, an American transplanted to London, he has also found time to write books about both Bob Dylan and Gram Parsons. The Coal Porters have often covered the greats, so I am surprised they haven’t featured on these pages before.

There are umpteen covers of “You’re Gonna Make Me Lonesome When You Go,” but this is the one that instills least of the lyrical sense of self-pity, giving it a simple matter-of-factness that fits perfectly with Ms. Peyroux’s smoky ennui. The just one notch above supper club arrangement is a well nigh perfect accompaniment, too.

Freddie King – Meet Me in the Morning (Bob Dylan cover)

Lordy, Bob Dylan does good blues, as the plethora of his songs covered by the great and good of the genre testifies. On “Meet Me in the Morning,” guitar maestro Freddie King picks up the hint and expands it to a logical conclusion, horns a-blazin’, guitar a-wailing’. Here is further evidence to support my claim. As for King, I feel he is the best of the Three Kings of blues guitar, the others being Albert and B.B.

Marmite is a yeast extract based spread that divides those who taste it; it is either loved or hated, with no middle ground. “Lily, Rosemary and the Jack of Hearts,” I gather, is described the Marmite track of Blood on the Tracks. I love Marmite and I love the track, it being my favorite by a mile. I guess its length precludes there from being many interpretations, and I have to say, none of them cut the mustard. This, with accompanying vocal from Eliza Gilkyson, may be the least annoying…….. Nice organ, anyway.

I have always been a fan of Canadian singer Ron Sexsmith, and his voice has the wrist-slashing fragility just perfect for the yearn in “If You See Her, Say Hello.” Only available on YouTube, I think, this is one of several covers he has played alone to camera, in what looks to be a bleak and lonely room. I can’t see the light bulb, but I imagine it swinging, uncovered and naked, like the singing. Here’s a link to pages of ’em, for all you once and future lovers of this far-too-often overlooked troubadour.

OK, I admit it: I was going to post Bill Murray’s singalong version of “Shelter from the Storm” – until I discovered this remarkable nugget, from the CD associated with an equally remarkable documentary. The Sachal Ensemble are a Pakistani collective of musicians, endeavoring to keep their musical integrity intact against the fundamentalism about them, intent on abolishing such unnecessary foibles as music from the cultural map. Or culture generally. Read about the film here. Or perhaps buy the CD, or the DVD instead/as well.

Another alternate verse duet, from sometime folktronica chanteuse Beth Orton and the always reliably world weary M. Ward, who often features in these pages, either alone or in a more lasting duo with Zooey Deschanel as She and Him. A slower speed accelerates the grief of the narrative, and the even simpler guitar bares still further the soul therewithin. I sometimes skip the original “Buckets of Rain,” but this is one of my favorites here and a great way to finish off a classic.

The original Blood on the Tracks is available on Amazon.

4 Responses to “Full Albums: Bob Dylan’s ‘Blood on the Tracks’”