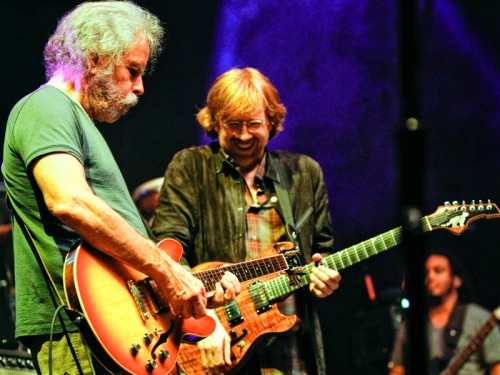 At the Grateful Dead’s 2015 “Fare Thee Well” final concerts, Phish frontman Trey Anastasio stepped into the Jerry Garcia role, playing lead guitar across five mammoth shows. They drew from a wide range of sources for their varying setlists, including plenty of covers – but the covers they chose were all songs the Dead had played regularly in the past (“Not Fade Away,” “Samson and Delilah,” etc). For the latest Phish-Dead pairing, though, they drew from a far less likely source: Lady Gaga.

The occasion was Florida’s Wanee Festival last weekend, when in a duo acoustic set Anastasio and the Dead’s Bob Weir busted out “Friend of the Devil,” “Bird Song,” and…Gaga’s “Million Reasons.” And against all odds, they sound terrific on it. On paper it might sound like a goof, but the jam band legends appear to actually like this pop hit and give it a pretty and impassioned delivery.

Watch it below, and start thinking of what other pop songs they should cover (our vote: Rihanna’s “Diamonds”)

For more Grateful Dead covers, check out our review of last summer’s epic ‘Day of the Dead’ concert.