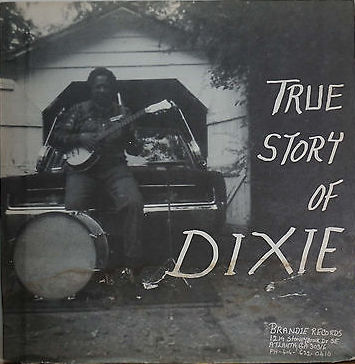 “The most-loved song in the south by whites, and the most-hated song in the south by blacks,” he begins, “is the song ‘Dixie’ – and all because of a stupid misunderstanding.” And from there he’s off, spinning a tale that begins as an accurate historical retelling about how the song was written before rambling off into shaggy-dog stories about James Brown, bone houses, and how Jay’s “sixteen young’uns” keep the roaches away.

He never actually gets back around to playing the song. His cover of “Dixie” is thirty seconds of singing and six minutes of storytelling. And it’s wonderful.

Abner Jay was an oddball and an eccentric. He called himself the “last working Southern black minstrel” and drove around in a mobile home that he would fold down to create a makeshift stage covered in signage. “This Is An American, Real Cultural Attraction,” proclaimed one. “I Don’t Get No Pay – Give a Donation,” another. The sides were a long, handwritten list of every song one could request, hundreds of of them. 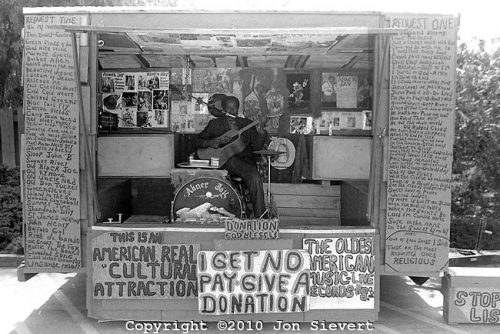 Jay had a talent for self-mythologizing, and it can be difficult to know what of his biography is real and what is exaggerated. On a leaflet he would pass out at shows, he labeled himself “World’s Champion Cotton Picker and Pea Picker, World’s Fastest Tobacco Crapper, World’s Greatest Jaw Bone Player, World’s Fastest Mule Skinner… THE WORLD’S WORSE BUSINESS MAN.” Here is him describing his upbringing, in the third person:

“Abner was a slave sixty five years after the slaves were freed, because Abner grandpa and Pa love the slave life. Abner was hired out to white plantation owners when he was at the age of six. Abner worked as a slave side by side with his grandpa, a former slave. Abner could not and did not receive his pay until after he was twenty one years of age. Abner ate and slept in the barn with the mules. The White folk would hand his food out of the back door to him in a pan, mostly left overs and the food the white folk dogs wouldn’t eat…

When he got older, he toured with minstrel and vaudeville shows before striking out on his own as a one-man band. He’d pluck guitar or banjo, sing, blow harmonica, and hit a kickdrum and high-hat with his feet, all during the same song.

He also played the bones. A precursor to playing the spoons, bones date back centuries and were a prominent part of 19th-century minstrel shows. Jay kept the tradition alive, using cow or chicken bones as percussion. Here’s a good primer by a younger musicial who has picked up the mantle, Carolina Chocolate Drops’ Don Flemons.

Abner Jay’s biography is irresistible, but what of the actual music? After the long storytelling intro, The True Story of Dixie offers a musical tour through traditional American folk music. Recorded and self-released on his own label, The True Story of Dixie draws from the same well of American folk music Neil Young did decades later for Americana, songs many of us sung in elementary school and think of as clichés. Well, they’re not clichés when Abner Jay sings them.

His rich baritone and banjo brings a homespun passion to “Buffalo Gals,” and his version of the jingle “Shortnin’ Bread” is delightful. “St. James Infirmary Blues” builds a powerful, lowdown dirge, before Jay once again ventures off into a wild tall tale. “The worst tragedy of my life was the first time when I got married,” he starts. “Went down the the license building for the license and they asked, ‘Did her pals consent?’ I said, ‘Who in the devil you think out there with that shotgun, Daniel Boone’?” On his hand-written album liner notes, he claims he’s now on his seventh wife – “and she’s about wore out too.”

There’s not much information about the album out there, but it sounds like a recording of his one-man band setup with the occasional overdub (presumably he’s not singing and playing harmonica simultaneously, although I wouldn’t totally put it past him).

In fact, the bad news is the album isn’t exactly easy to come by. Vinyl records sell for $75 and up, but vinyl rips abound on YouTube and elsewhere. Also, Little Axe Records has put together an Abner Jay compilation that includes some of these covers alongside his originals.

Here’s one of the only existing videos of Jay performing, from one of the last performances before his death in 1992: