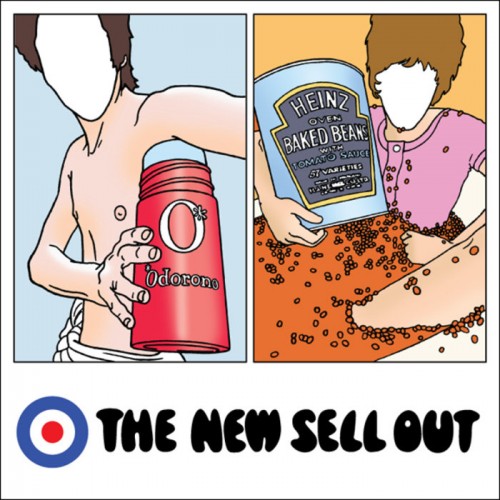 The power pop intelligentsia waited for the album’s release with bated breath and more than a little drool. And waited. And waited…

It turned out that Futureman Records couldn’t make it in a world where record labels were bricks-and-mortar establishments. The album was locked away in the dark; some of its songs crept out when its artists released bonus tracks or odds ‘n’ sods collections, which only served to further whet the appetites of devoted fans everywhere. It was power pop’s own Chinese Democracy.

Then, in 2012, over a decade after the release was scheduled, Futureman Records rose again, as a virtual label on Bandcamp. With their phoenix-like return came The New Sell Out (dedicated to Rick McBrien), and unlike Chinese Democracy, it lived up to its legend.

Splitsville – Our Love Was (The Who cover)

All the artists clearly share a real affection for the album, most of them sticking close to the original arrangements and the general spirit. There are a few exceptions; one is Splitsville’s version of “Our Love Was,” which starts out with rinky-dink programming and builds up to a big loud melodic release. One can picture the Who live in concert, amping the song up to make it sound like this. At the end, Ed James does the “Pussycat/Speakeasy” part while Mitch Easter handles the Rotosound strings jingle.

The Shazam – I Can See For Miles (The Who cover)

“I Can See for Miles” was the album’s biggest hit – the Who’s biggest hit in the US, in fact – and the Shazam treat it with great respect, following the blueprint to the letter. That’s John P. Strohm of the Blake Babies doing the Charles Atlas ad at the end.

The Andersons – Heinz Baked Beans (The Who cover)

Even when the original tracks were dashed-off pieces of fun, the covering artists gave them their all. Listen to how the Andersons change their style of playing every four bars of the “Heinz Baked Beans” commercial. Also, enjoy Cockeyed Ghost taking a while to get the “More Music” bit right.

The Pearlfishers – Someone’s Coming (The Who cover)

The New Sell Out adds bonus tracks of songs that the Who recorded around the same time as The Who Sell Out. One was a John Entwistle song called “Someone’s Coming,” which told the story of two young lovers meeting in secret. It’s a much tenderer song lyrically than ol’ Thunderfingers usually wrote, and the Pearlfishers’ treatment gets that tenderness across with a very pretty acoustic cover.

SWAG was a “the greatest supergroup you’ve never heard of,” made up of members of Wilco, the Mavericks, and Sixpence None The Richer. Here they take on “Early Morning, Cold Taxi,” a rare Roger Daltrey-penned Who song. If you like the sound of this, their 2001 album CatchAll is available on YouTube.

Get The New Sell Out in its entirety at Bandcamp.