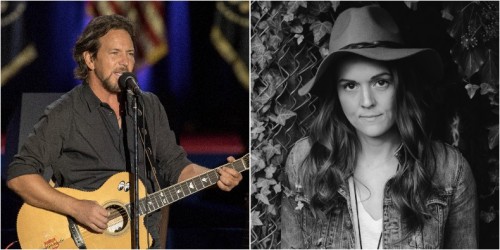 It stands to reason that Pearl Jam would be among a very solid lineup of talent covering Carlile’s 10-year old album The Story for charity tribute album Cover Stories. On the heels of their induction into the Rock and Roll Hall of Fame, Pearl Jam shows no sign of slowing as they continue to produce fantastic music such as their new version of “Again Today”.

Carlile herself lends backing vocals to this boisterous rendition of a very introspective and slow song. A nice full band sound with a head bopping beat are a complete juxtaposition to the original with it’s ethereal vibe and simple clear vocals from Carlile. Both versions work beautifully for what they are.

Parton gives “The Story” a sweet, country vibe with her vocals. Simple, but emotion filled. The guitar and strings are absolutely perfect accompanying Parton. If these two tracks are indicative of the rest of the album, we are in for a real treat. The album comes out May 5th.

PS. Here’s a live video of Adele covering Carlile’s “Hiding My Heart.” A studio version, first released as a 19 bonus track, will also be on Cover Stories.