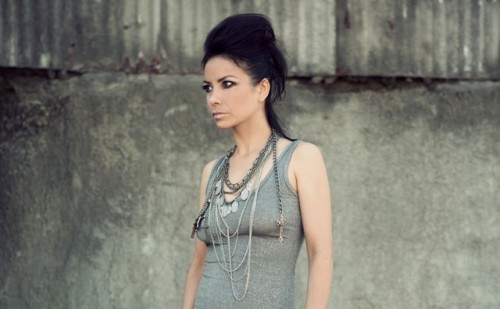 In Canada, and among elite musicians, it seems foolish to claim that the work of Emm Gryner flies under the radar. She has a dozen and a half releases to her name, not counting the ones with the folk trio Trent Severn (where she sings and plays bass) and the hard rockers Trapper. She’s played with David Bowie’s band and opened for Def Leppard. Nelly Furtado named her album Science Fair as a desert island disc. Bono was once asked what songs of the previous 20 years he wished he’d written; Gryner’s “Almighty Love” was one of the half-dozen or so he named.

Despite this worldwide fan club, Gryner remains a bit of a mystery to American listeners, with only two of her songs cracking 25,000 listens on Spotify. Both those songs are covers (you’ll be hearing them below); Gryner clearly knows her way around a good version of someone else’s work. Not just in her performing, either – for two years she co-hosted “Under the Covers,” a Canadian radio program about cover songs. Wonder if any of the following got played on the show?…

As usually happens when a modern act cross-genre-covers a super-’80s song in concert, members of the audience here make sure their knowing, mocking laughter is heard when they recognize “Beat It.” But Gryner’s not out to bury this one. She gives it a piano-only kind of bounce that doesn’t skimp on or detract from the song’s message.

In 2001, Gryner released Girl Versions, a cover album that reinterpreted songs written by men. That was the same year Tori Amos released Strange Little Girls, built around the same concept, but where Amos was all about presenting the songs from the woman’s point of view, Gryner seems to just want to sing songs she likes, and the louder the original, the better. She transfers Randy Rhoads’ unforgettable “Crazy Train” riffs to the piano and gives the song a whole new kind of beauty.

Emm Gryner – Pour Some Sugar On Me (Def Leppard cover)

Another song from Girl Versions, Gryner’s “Pour Some Sugar On Me” currently has racked up almost 100,000 listens on Spotify. It’s no wonder – using 88 keys and the truth, she turns the song into a wholly sensual experience. Gryner is a huge, unapologetic fan of Def Leppard’s – “I was the only 12 year-old girl in town with the cover of Hysteria sewn to the back of my jacket,” she said in one interview, admitting she recorded this version to send to Joe Elliott, DL’s lead singer as a gift. “He must have liked it,” she went on, “because he wrote me a letter raving about it.” Nobody can blame him.

Gryner’s most popular song on Spotify (over 100K listens), “She’s Gone” is the title track to her Hall & Oates tribute EP. Gryner’s got a band behind her on this one, and they bring the impact when the chorus kicks in – but the impact of Gryner’s performance is just as strong. We’re definitely in the moment with her as she performs, and her refusal to make any jarring pronoun switches is both welcome and unnoticed.

On November 28, 2010, 36 years and three days after Nick Drake passed away, a tribute concert was held for him at Trinity St. Paul’s United Church in Toronto. The concert was acclaimed, and Gryner played a key role in that, performing two of Drake’s songs (with Robert Kirby’s string arrangements) and keeping their beauty intact (admittedly, not a hard thing to do) while adding her own in a way that was integral, not incidental.

Emm Gryner’s music can be found on Amazon.

2 Responses to “Under the Radar: Emm Gryner”