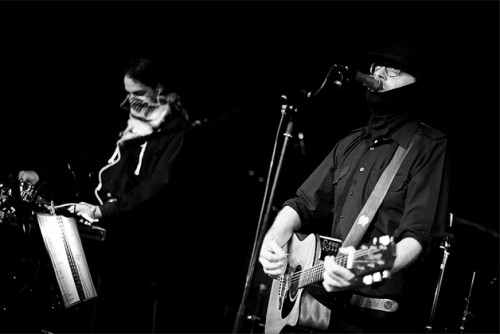 The first clue that Death in Rome’s “Toxic” might not be your standard Britney-covers fare came in the Facebook band’s intro: “During the work on it, the song became for us an anthem on nihilisim and the mighty Emil Cioran. Enjoy, dance, be happy, it’s all in vain anyway.” Which, to be fair, is basically the message of Britney’s song “‘Til the World Ends.” But as if that wasn’t odd enough, they included a deeply depressing quote from philosopher Cioran: “There is no other world. Nor even this one. What, then, is there? The inner smile provoked in us by the patent nonexistence of both.” And this has what to do with Britney exactly?

It makes a little more sense when you hear the cover. Like Nine Inch Nails played on acoustic instruments, neofolk is a dark and spooky music and it leads to a very jarring cover. The toxicity in Death in Rome’s version is not a cutesy metaphor for love, but a horrible poison all around. Listen below.

If that weirded and/or bummed you out, here’s a bonus palate cleanser. Jamie Kent does another folk Britney cover, though this “(Hit Me) Baby One More Time” is far from dark.