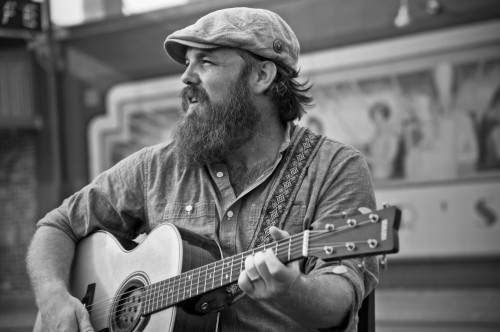 “I probably heard this song 10,000 times throughout my life,” Broussard says. “Aretha was a favorite of my father’s, this song in particular. Honestly, the first thing that struck me about it was the piano. It’s out of tune! I wouldn’t find out why until much later.”

In the new version, he and his father deliver a much quieter and more intimate duet with just their guitars. Unlike the album this promotes, bringing his dad along is no charity project; Ted Broussard is a legend in his own right, a former guitarist for iconic “swamp-pop” band the Boogie Kings who was inducted into the Louisiana Music Hall of Fame in 2010.

“My father is an incredible musician, so having him accompany me is always a treasure,” Broussard says. “Beyond that, I’m being sort of selfish and using the resources at my disposal to create something that will last forever in my family. This footage is priceless to me and I assume that it will only increase in value to my family as time moves forward. My father’s influence on me both as a man and a musician cannot be overstated. He’s a wonderful human being and I’m lucky to call him my dad.”

Watch the video below, then pick up the S.O.S. 2 album here.