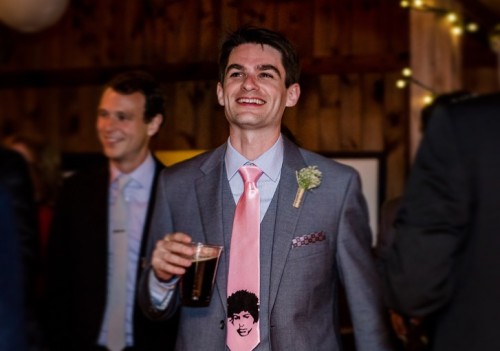 The song that made me first fall in love with covers, and still my favorite cover song of all time. I’ve written about it here before – including in two prior Q&As (whoops!), but this site may not exist without this song.

In 2006, Bob Dylan hosted a satellite radio show called Theme Time Radio Hour. As a Dylan superfan (see my next pick, and also #7, and also #9, and also the tie in my photo…), I devoured the show every week. Frankly, Dylan’s song intros tended to be more interesting than the songs he picked. I was just out of high school in 2006, and Tony Bennett singing the American songbook (a precursor to Bob’s endless run of standards albums today) wasn’t my bag yet. He’d often throw in a left-field pick or two – Dylan introduced me to, of all people, L.L. Cool J and The Streets – but the majority of the songs were, to my teenage years, schmaltz.

Each episode had a theme, and the tenth episode’s theme was “Summer.” Dylan’s intro began: “Time to open up the first hydrants, and have a party in the streets, ’cause it’s summertiiimmmeeee.” The song began to play, George Gershwin’s “Summertime.” I knew the song well – who didn’t? – but not like this. Billy Stewart’s 1966 cover was fast, loud, soulful, scatted, entirely irreverent. It sounded nothing like any version I’ve heard. Was this allowed? Could you even do this?

My love of covers was born. A year or so later, so was the blog.

Our first post began a series that continues to this day: covers of every song off a classic album. The first album I did was Dylan’s John Wesley Harding, and the first song I posted was a live version of Wilco’s Jeff Tweedy covering side one, track one back in 2005.

Something very strange happened six months after we started. Inspired perhaps by Dylan’s radio show, I used to post covers along a certain theme. On April 4th, 2008, that theme was “Failing” (real cheery way to build a blog!). One of the songs I picked was Carla Bozulich covering Tom Waits’ beautiful-loser ballad “On the Nickel.” In the description, I wrote: “If you’re in LA, ‘on the nickel’ is being down and out, not where you want to be.”

Then here’s the crazy thing: Tom Waits responded. Specifically, he posted a comment explaining another meaning of “on the nickel” having something to do with half a dime bag of heroin (the comment is sadly gone, a casualty of our move from Blogspot).

At first, I didn’t believe it was really Waits. Commenting on random blogs about himself does not really seem his M.O. Then again, given that he so rarely tours or releases music, who really knows how he fills his time?

To investigate, I opened our Google Analytics. As anyone who runs a website knows, you can track every visitor by IP address, which gives you their GPS coordinates (kind of creepy, frankly). I ran the commenter’s coordinates through Mapquest, and sure enough, it matched exactly where Tom Waits supposedly lived. So unless his wife, kid, or housecleaning service sits in the next room commenting under the name Tom Waits, it appeared to really be him.

It was the first time a famous musician had ever acknowledged us. And, as a Tom Waits superfan who had then just booked a flight from Boston to Phoenix to attend one of his rare concerts, I still find it the most exciting. I dragged a few friends out of bed and we went to an all-night diner to celebrate. I got the most Waits-ian meal I could imagine: liver and black coffee. The combination was abysmal, but it’s one of the best meals I’ve ever had.

One thing we did more of in the early days was commission original cover songs. Frankly, it’s something I’ve thought of reviving. The way it worked was, we would pick a musician we liked, and ask them to pick ten songs they might like to cover. Then we’d put it to a reader vote. The musician would record a cover of whichever song won.

Our friend James Eric was the first artist, and Devo’s “Beautiful World” the first winner, beating out MGMT’s “Time To Pretend,” Stevie Wonder, “Signed, Sealed, Delivered,” and more (I’d still be curious to know what he would have done with The Hold Steady’s “Slapped Actress”). He kicked off the series in grand fashion, even recording two separate covers, electric and acoustic.

No post takes more work every year than our annual best-cover songs list, but no post is more satisfying either. It has now ballooned to a 50-song countdown with contributions from all our writers, but the first installment was just 20 songs, and it was just me. The first winner was Norwegian folk duo Kings of Convenience doing a beautiful, acoustic cover of “It’s My Party.” All these years later, it still holds up.

Without frankly much effort on my part, by 2010 Cover Me had grown a real following. But we were still sitting on an ugly Blogspot page. It was time to build our own home.

I didn’t know much about web design beyond one HTML class I’d taken in college, but I slowly figured it out. I bought the domain covermesongs.com and, after months of trial and error – mostly error – designed the site you see now (which, frankly, is probably overdue for another facelift). I launched it in grand fashion on June 1st with a Lucinda Williams premiere. The cover is good, but what I remember most is not the music, but the visual: the song sitting on our brand-spanking-new homepage, our very own home.

For the first three years, I ran the blog myself. As we grew, though, it became more than one person could handle. So I put out a call to other writers. The response was amazing; we had a dozen applicants within the first week.

Our first post ever by someone-who-wasn’t-me was a review of Subterranean Homesick Blues: A Tribute to Bob Dylan’s ‘Bringing It All Back Home.’ So to pay tribute to the many great writers who have graced us with their work over the years, I’ve picked a song from that.

And hey, want to join us? Here’s the link to apply.

“Ahoy,” the email began. We’d had a roster of writers for a few years now, and this one came from another prospective Cover Me staffer – a good one too, by the looks of it. He even had his own covers blog!

Since that day in 2011, Patrick Robbins has become my right-hand man running Cover Me. He runs our Features section with ingenuity and aplomb, building it into the most popular part of the site. He spends countless hours encouraging and supporting our many talented Features writers, and still finds time to draft his own fantastic pieces. Hell, this Q&A series you’re reading right now was his idea!

9. Jimi Hendrix – All Along the Watchtower (Bob Dylan cover)

Cover Me is a blog. But come this October, it will be a book too.

On January 1st, 2014, I made a new year’s resolution: write more. We had a great stable of writers and most of my Cover Me time was spent editing and otherwise managing them. I had a demanding day job by that point and writing about cover songs myself – the whole reason I started the blog – had fallen by the wayside.

I knew that due to my job I could not go back to the five-news-posts-a-day schedule I had kept up previously, so I resolved instead to focus on fewer longer and more researched pieces. The first would tell the exhaustive story of Jimi Hendrix’s iconic cover of “All Along the Watchtower.” It took several months of reporting. I dug through libraries and newspaper clippings, listened to countless outtakes, and even interviewed Hendrix’s old girlfriend and manager.

The piece posted on March 20, 2014. I was proud of it, but didn’t have high hopes for its traffic. This was thousands of words, the longest post we’d ever done, and didn’t have any of the MP3s we usually included to download. But it became what is still, to this day, the most popular post we’ve ever run.

I did a second long piece a few months later on Patti Smith’s cover of “Gloria.” Skip ahead a couple years, now this idea has turned into a book, the first in-depth history of the cover song.

Titled – of course – Cover Me, the book is twenty chapters about twenty songs just like “Watchtower” and “Gloria.” I was able to interview heroes like Roger Daltrey (about “Summertime Blues”), David Byrne (about “Take Me to the River”), “Weird Al” Yankovic (about his polka medleys), and dozens more.

Cover Me: The Stories Behind the Greatest Cover Songs of All Time comes out October 2017 from Sterling Publishing. Preorder it at Amazon.

I started Cover Me on a whim one afternoon and admittedly didn’t give a ton of thought to the name. “Cover Me” was a Bruce Springsteen song I liked, it seemed to fit, so on it went. Had I thought more about it, I might have picked a more distinctive moniker. coverme.com was then and remains today a Canadian health insurance company, while @coverme on Twitter is some sort of hunk-bot. Even my parents sometimes refer to the site as “Cover Me Songs” due to our URL.

I didn’t even post a cover of the song that gave us our name for almost a year into our run. In August 2008, I finally posted one in a full-album set on Born in the U.S.A. It was Thea Gilmore’s beautifully understated ballad, so to celebrate ten years of Cover Me the blog, I’ll end with that same version of “Cover Me” the song.

6 Responses to “A History of Cover Me in Ten Songs”