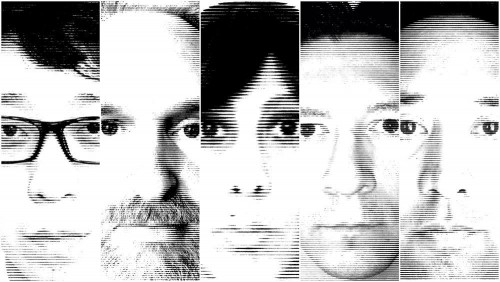 An article about the shoegazing band Echodrone begins, “Echodrone are one of those bands that I want to be horribly embarrassed to have not been aware of ‘til their fifth album and tenth year…” The writer goes on to add, “Although, apparently many of the band members are yet to even meet each other… So I’m inclined to be slightly less embarrassed… ” Indeed, the band may be based in San Francisco, where it started out as a two-man operation (Eugene Suh and Brandon Dudley), but the addition of its newest members (Mike Funk, Jim Hrabak, and Rachel Lopez) has made them a quintet that records its songs virtually, passing the music files from one set of hands to the next via Dropbox. They may not play together, but you sure hope they’ll stay together.

In addition to their original songs, the band has proven quite adept at the cover game. They’ve proudly compiled a YouTube playlist of all eleven they’ve released so far. Get your feet wet with five of them below…

“Dedicated to the ’80s awesomeness that is Andrew McCarthy!” says the band about Mixtape for Ducky, a six-song album saluting stalwarts of the era of legwarmers and puffy vests. Among those saluted are famed MTV casualty Christopher Cross, whose “Sailing” gets taken on a yacht rock trip beyond the stars.

The Blog That Celebrates Itself is more than a Brazil-based blog about the shoegazing scene; it’s a label that’s been putting together some of the best tributes to pioneering acts of that scene. This year alone has seen House of Love, Galaxie 500, Chapterhouse, Catherine Wheel, and many more get the star treatment. Husker Du got their honors with These Important Years, which included Echodrone’s take on Bob Mould’s irony-free reminiscence “Celebrated Summer.”

Echodrone – All Cats Are Grey (The Cure cover)

In 1745 Ben Franklin wrote a letter to a friend advising him to take on an older woman for a mistress, telling him that “in the dark all cats are grey.” It’s a pretty sure bet that’s not the vibe Robert Smith was going for when he wrote “All Cats Are Grey,” a track of warm desolation from the Cure’s Faith album. Echodrone give the song the guitars the Cure eschewed, changing the feel but not the impact.

Echodrone’s 2010 release The Sun Rose in a Different Place finds them covering “Drive,” the Cars’ greatest hit (in terms of worldwide chart success). It keeps the quiet pull of the original intact, while totally living up to the band’s name with its reverb and its held notes.

Saint Marie Records puts out an annual compilation sampler of its artists and their recent work; in 2014, each artist also did a cover of Slowdive, the influential dream-pop band. Echodrone chose “Shine,” explaining later that “we wanted to do an older song that we could do justice to.” That they did, making a Slowdive song into an Echodrone song without even being in the same room.

Listen to more Echodrone on Bandcamp.