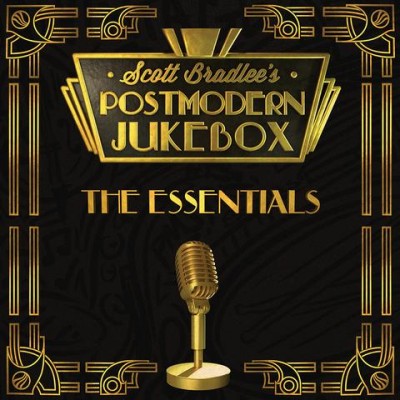 But there’s still the sense that Bradlee has something to prove – he’s looking to place this album high on the Billboard charts as he takes PMJ on its North American tour this month. “No more talk of Postmodern Jukebox as a ‘YouTube act,’ or ‘online viral sensation,'” he says. “This is real, we’re here to stay, and we’re ready to change the music industry.”

Bradlee’s modus operandi with Postmodern Jukebox has stayed consistent. He covers a new song every week, one room, one take, no overdubs, with a rotating cast of nattily dressed performers (Bradlee calls it “something of an ‘SNL for singers'”), and an old-timey sound, with Bradlee’s piano being the one constant. This schedule has allowed him to release a whopping twelve albums in three years, giving him a rich catalog from which to select the eighteen songs that make up The Essentials. Bradlee’s included the biggest viral hits – “Creep” sung by Haley Reinhart, with 22 million YouTube views, and “Royals” with the unforgettable Puddles the Clown, with 16 million more, both appear here. He’s also sought out the most outstanding vocal performances – I nominate Mykal Gilmore’s turn on “My Heart Will Go On” as especially remarkable – and the retro-est of retro sounds. “Stacey’s Mom” never said 1930’s hot jazz to me before, but after hearing Casey Abrams perform it that way, it will forever.

People have pegged Postmodern Jukebox as being a cocktail lounge act, but that does them a disservice. They’re not stuck in the distant past; in fact, the strength of their arrangements comes from their variety. “Such Great Heights” sounds like a Jackson 5 number, and Maroon 5’s “Maps” has finally found its calling as a lost Natalie Cole track.

The album’s repeated “Listen to X sounding nothing like Y’s original when performed by Z” pattern can get a little wearying; the listener can be forgiven for looking forward to the next song well before the current one finishes. That’s why the strongest songs on The Essentials are the ones with the most arresting vocal performances. Bradlee gives each singer a “featuring” credit on their songs, allowing us to find out that it’s Morgan James raising neck hair nationwide on “Maps.” It’s also clear as can be that Puddles’ golden baritone can stop you in his tracks without you seeing that he’s a six-foot-eight clown.

Postmodern Jukebox has spent its lifetime using its time machine powers for good; it’s introduced the world to no-longer-unknown great singers and proved that a great song is a great song, no matter how old the clothes it wears. (Speaking of which, the treatment Macklemore’s “Thrift Shop” gets is a real treat too.) Kudos to Scott Bradlee for continuing to run his race – if it means more reinvented hits like the ones on The Essentials, we’re willing to wait on that victory lap for a while longer.

One Response to “Review: Scott Bradlee’s Postmodern Jukebox, ‘The Essentials’”