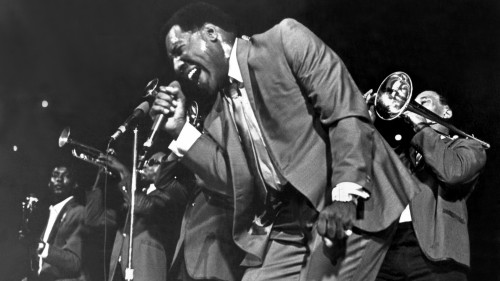 From such small beginnings come great things, especially when you add Redding’s heart and soul to the mix. (Having Booker T. and the MGs backing him up didn’t hurt either.) Add an audience, and you’ve got a real barnburner on your hands. Redding stopped many a show with the song, and other artists picked up on this, from Janis Joplin (who performed the song at Woodstock) to the Blues Brothers (who used it as their intro music). Many others took it into the studio, including Aretha Franklin, Edgar Winter, and the Chambers Brothers, who had a minor hit with it.

And that’s just the tip of the iceberg…

Sly and the Family Stone recorded “I Can’t Turn You Loose” for their Dance to the Music album. It didn’t make the cut, though, and it stayed unreleased for almost thirty years. That’s a shame, as their take on it would have sounded just as fresh in 1968 as it does today. Highlight: the all-vocal intro.

In the ’60s, the Motortown Revue packaged Motown’s stars with its up-and-coming new artists and sent them on the road, in America and beyond. The 1969 tour featured Sondra Williams, a.k.a. Blinky, as one of those new talents. She didn’t reach the levels of success other Motown artists did; one listen to “I Can’t Turn You Loose,” from one of the Motortown Revue shows, will make you sorry that that was the case.

Best known for bringing “The Dark End of the Street” to the world, James Carr also did great things with “I Can’t Turn You Loose.” His cover completely takes out the guitar and horns, leaving brisk bass and drums to support Carr as he sings with, to paraphrase another Otis Redding song, pain in his heart.

Watching Tina and the Ikettes move in this 1973 video, taken from the TV show The Midnight Special, one can be forgiven for not wanting the singing to start. Then Tina grabs the microphone, and you’re reminded that as good a mover and shaker as she was, she was an even better singer. “I Can’t Turn You Loose” is just as great in her hands as you’d expect it to be, if not greater.

How do you take over a room that has the President of the United States in it? By being Mick Jagger, that’s how. A year and a half shy of his three score and ten, Jagger performed for Barack Obama at a 2012 concert at the White House. It was a blues-based show featuring B.B. King and Etta James (who’s done a remarkable version of “I Can’t Turn You Loose” herself), but Jagger had other plans. “It wasn’t really blues, but I wanted to treat it like a club,” he told Rolling Stone. “I practiced for two weeks before – then it’s like riding a bicycle.” His “I Can’t Turn You Loose” shows him in no danger of falling off.

Listen to Otis’s KILLER version on his Live in Europe album, which is available on Amazon.