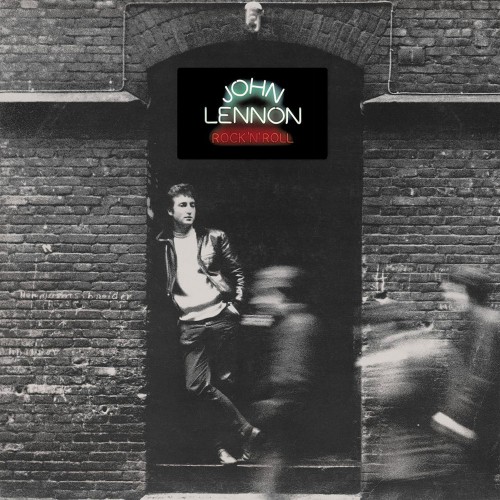 It is within this self-reflective/post-self-destructive climate that Lennon embarked on the sessions that would produce Rock ‘n’ Roll. Not only would it represent a return to the music that inspired him in the first place, it also served as a swan song/love letter to fans, as he would, for all intents and purposes, retire from music and the public eye for the next half decade to concentrate on being a father to his son Sean. Because of this, there’s a heavy air of nostalgia at play. From the cover image (John in 1961 Hamburg, with a blurred Paul, George, and Stu Sutcliffe walking past him) down to the track listing, Rock ‘n’ Roll represents something of a mid-life reanalysis of self for the erstwhile Beatle. By returning to his roots, he was able to reassess his own position within and feelings toward the world of pop music.

Instead of moving forward, as he had done on his previous post-Beatles outings, Lennon here finds himself reverting to a safer, pre-fame space. He and his crack band of studio musicians gamely tear through a handful of early rock and roll hits – all built around a sound that became obsolete with the arrival of the Fab Four – and generally sounding like the kids they had been when first confronted with these life-altering songs.  With Lennon facing a number of issues both personal and professional, this return to an earlier, simpler time functioned as something of a palate cleanser, a retreat to a more manageable time.

Opening with reverb-drenched version of Gene Vincent’s “Be-Bop-A-Lula,” Lennon makes his intentions known from the start. Gone is the sloganeering and political activism of the radical John Lennon, replaced by the teddy boy who thundered out of the Cavern Club, took Hamburg by storm and eventually proved the cheeky, mildly subversive member of the biggest pop group in the world. Adopting all of Vincent’s hiccuping affectations, Lennon is once again a teenager standing in front of a mirror, working to find an identity for himself on Menlove Avenue. For a brief moment he is no longer Beatle John, instead merely John Winston Lennon, budding rock and roller and aspirant guitar player.

Lennon’s hit take on Ben E. King’s “Stand By Me” is one of the few instances on Rock ‘n’ Roll that firmly marks it as a product of the 1970s. Its production, arrangement and sound reflects that of his solo records from the same time; a modernization of an old familiar sound with more than a hint of Phil Spector’s influence. Unlike the other covers here, “Stand By Me” feels as though it were crafted with the contemporary radio charts in mind. There is none of the rawer edges present elsewhere. Instead, it’s all smoothed edges and triumphant, post-Wall of Sound chorus designed to sound at once nostalgic and of the now. Regardless, it’s a late-career defining performance that sonically bridges the gap between his early solo albums and Double Fantasy, showing Lennon still knowing how to craft a hit record with the right amount of focus.

“Medley: Rip It Up/Reddy Teddy” carries traces of his work with Harry Nilsson on the latter’s Pussy Cats, his voice stretched and strained to its limits. Here he reverts to an earlier version of himself, embracing the free-wheeling, inherent fun nature of early rock and roll. You can almost hear the sheer glee in his voice as he speeds through each, backed by a massive sound built around horns, guitar and fading memories. “Ain’t That A Shame,” “Do You Want To Dance” and “Sweet Little Sixteen” are all given a muscular swagger that forgoes the original’s quicker paced approach. Only on Buddy Holly’s “Peggy Sue” does he stick largely to the original, ramping up the tempo and doing his best to do right by his late idol.

On Chuck Berry’s “You Can’t Catch Me,” he amps up the aggression, slows the tempo and throws in a knowing “Come Together” tease in his delivery of “Here come a flat-top, he was movin’ up with me,” itself clearly repurposed from Berry’s original. Embracing his pre-fame musical persona, Lennon is able to free himself of all the baggage accumulated over the last decade or so and once again have fun with the music. Gone is the cynicism, the frustration and barely contained anger, replaced by a refreshingly loose sounding session. In general, his approach is then to take well-known pre-Beatles staples, slow them down and apply his own Spector-esque Wall of Sound to create a rough-around-the-edges re-visitation of his Hamburg days.

It would be a full five years before he would again return to the studio, insisting on his retirement from the world that had made him a star. Rock ‘n’ Roll represents the point at which John Lennon began his slow retreat into himself, taking the time to be a father, husband and human being rather than an internationally recognized icon. Were this the last we ever heard from Lennon on record, it would be a fitting bookend to a career built on the foundations of early rock and roll, defined by pushing the form into fantastic new directions with the Beatles and remembered for its myriad contributions to the catalog of modern popular song. That he would see fit to pay homage to these early inspirations shows a level of maturity and introspection that would ultimately help inform his true final album, Double Fantasy. In this, Rock ‘n’ Roll serves as an unjustly overlooked career high point worthy of reconsideration.

A remastered Rock ‘n’ Roll is available from Amazon.