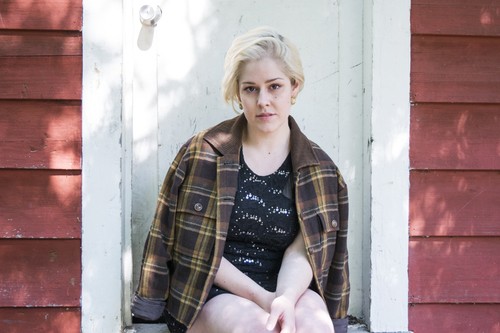 From the prairie town of Stony Plain, just outside of Edmonton, Alex Vissia found stardom in Canada performing with her two younger sisters, in venues up to and including the Olympics. After graduating from college, she turned solo; since then, she’s released two records and is working on her third, writing songs described as “grown from folksy prairie roots, distilled until clear, and carefully Rock-filtered to let just the right amount of dirt back in.”

On this site, of course, it’s Vissia’s covers that we’re interested in, and here she’s proven she has the goods and then some. With her warm, powerful voice, compared to Neko Case, Brandi Carlile, and more, she brings her covers deep feeling, often rearranging them in a way that makes them her own. Big talk when you’re covering the Beatles, Neil Young, and other such greats, but hear for yourself how well she does it…

There’s nothing laid-back about “Sundown” the way Vissia sings and plays it. Gordon Lightfoot’s roiling account of a problematic relationship has a groove to it that’s easy to slide into; Vissia’s not so much denied that groove a light foothold here as dismissed it altogether, in favor of serious pauses and a electric guitar sound that’s determined to ricochet from wall to wall.

Alex Vissia – Journey Through the Past (Neil Young cover)

It’s pretty much a right of passage for Canadian musicians to cover Neil Young at some point in their careers, and no matter the genre they’re in, they’ll likely as not find a Neil song that’s right in their wheelhouse. Vissia chose to cover “Journey Through the Past,” from Young’s Time Fades Away album. It’s an album Young dislikes – he claimed he only released it “so you folks could see what could happen if you lose it for a while” – but as always, there were gems in his junk, and Vissia found a beauty here.

Paul McCartney called “She’s Leaving Home” “rather poignant,” and indeed, its sentimentality sometimes gets it docked a few notches in best-Beatles-song polls. Vissia’s take is a lot tougher, giving the song bite without sacrificing its emotional punch. By not floating on the melody the way McCartney did, she conveys the parents’ realization that their baby’s gone is not swoonworthy, but a moment of true pain and fear. The song’s all the better for it.

One reviewer described Vissia’s cover of the Martha & the Vandellas classic “Heat Wave” as melted. It’s a wonderful word choice, accurately capturing the way the song’s been reshaped from its original peppy form; we can hear it soften, almost in slow motion, under Vissia’s fervent tenderness.

Nick Drake’s “Northern Sky” moves a a brisk tempo (one that Portastatic follows in their great cover), but Vissia’s slows the song down considerably, giving it the chance to luxuriate in its own romantic grandeur. There’s a part of Norah Jones that must want to claim this cover as her own.

2 Responses to “Under the Radar: Alex Vissia”