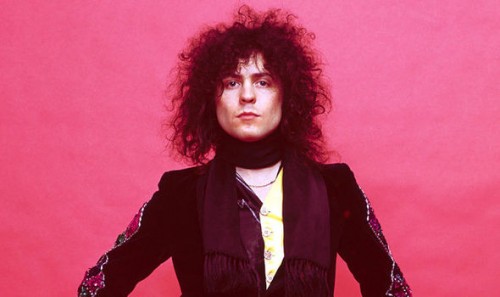 Marc Bolan died in a car crash 39 years ago today, just short of his thirtieth birthday. Tragic as this was, it was a perfect cap to the legend of the former Marc Feld, a man determined to be a near-myth of a rock star; live-fast-die-young had to be the closing number. But as other would-be legends (hi, Jobriath!) might tell you, an image won’t last without talent to keep it up, and Bolan’s talent for writing simple, catchy glamthems has kept him in the front of public consciousness, even for the ever-growing segment of the public that was born after he moved on.

Bolan’s got a devoted following that would love him today no matter how little he recorded, but as it happens, his back catalog is rich with all that glitters, and many artists, famous and unknown, have found their own fortunes within it. Here are some of them.

While T.Rex was conquering the globe (or at least a corner of it), Big Star was struggling to be heard. Two decades later, they were just as beloved and arguably more influential, so when they reunited (well, half them and half members of the Posies) for a gig at the University of Missouri in 1993, the power-pop world shook in disbelief and excitement. The resulting live album, Columbia, featured a cover of T.Rex’s “Baby Strange,” but it took until Record Store Day 2016 for the full set to be released as Complete Columbia, revealing that the band also did a ragged but spirited version of T.Rex’s “Jeepster.”

Matthew Joseph Hughes rhymes with Automatic Shoes. A singer/songwriter from Spokane who’s in the music business for the best reason – that is, the love of it – Hughes named his one-man band after a phrase in T.Rex’s “Telegram Sam.” His YouTube page has a ton of his songs, both originals and covers, many of them versions of Bolan-penned tunes. Here’s his gentle cover of “Metal Guru” from his And Yet the World Turns album.

At Bolan’s early-’70s peak, he could do no wrong, not even on B-sides with lines like “Woman/ I love your chest/ Baby, I’m crazy ’bout your breasts.” That would be “Raw Ramp,” the flip side to “Get It On,” worthy of being an A-side in its own right. Dramarama, who knew a thing or two about being ascloseasthis to a hit, cover it closely and respectfully on the glam rock tribute album Blockbuster.

Like any good messiah, Bolan gathered a following with both a magnetic presence and an encompassing message – his was delivered to the youth of the day, empowering them with knowledge when he sang, “You won’t fool the children of the revolution.” Former Fiery Furnace Eleanor Friedberger gives that message one thing that Bolan didn’t – a good beat that you can dance to.

Here at Cover Me, we’ve been avowed fans of Laurence Collyer, a.k.a. the Diamond Family Archive, for many years. He applies new melodies to old favorites in such a way that you find yourself falling in love with them all over again. “Telegram Sam” is yet another tune that he’s given a whole new outfit, forcing the listener to pay attention to something that’s not as familiar as it once was.