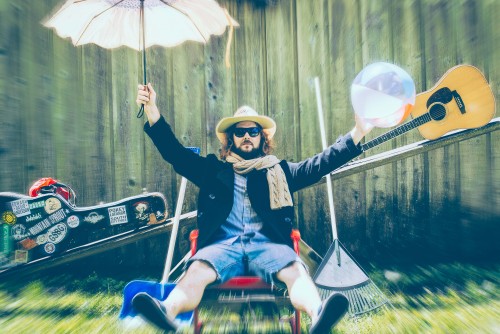 Other than his hit for Glen Campbell “Gentle On My Mind,” John Hartford songs don’t get covered as often as they should. The pioneering fiddle and banjo player sometimes gets pigeonholed as just a bluegrass guy (and none were better), but he could do so much more, from rockabilly covers to weird experimental stuff (where’s the hip indie cover of his heavy-breathing-and-fart-sounds “Boogie”?). The best recent cover of a Hartford tune has been Jones Street Station’s “In Tall Buildings,” but Chicago Farmer’s new version of “I’m Still Here” gives that one a run for its money.

Chicago Farmer, aka Cody Diekhoff, is neither a farmer nor – any longer – a Chicagoan, but his family history in rural farming communities runs through all his work. Fellow folk journeyman Todd Snider calls him “the genuine heir to Arlo Guthrie or Ramblin’ Jack Elliott” and he’s the perfect person to honor his fellow Midwesterner John Hartford. He told us about why he picked this song:

I always felt if I was to cover someone else’s song on an album, it would have to be for the right reasons. After performing for several years at The John Hartford Memorial Festival in Bean Blossom, IN I found a new appreciation for Mr. Hartford and dug deep into his music. Whether its a solo song with just a banjo or fiddle, or one with a whirlwind of bluegrass greats, his songs connected with me right away.

I was also intrigued by the time he spent in the Midwest, specifically his time in Central, IL along the Illinois River which is also my singing and stomping grounds. This area has been through a lot. Our land, homes, and lives have been ravished by tornadoes, job loss, addiction, and so much more. Still, after all of that, we’re still here. Working on rebuilding our land, our homes, and our lives. It’s a song that details all of our wrongs, but looks forward for all of the right reasons.

“I’m Still Here” is on Chicago Farmer’s new album ‘Midwest Side Stories’ (great title!), which is out later this month. Find out more on his website.