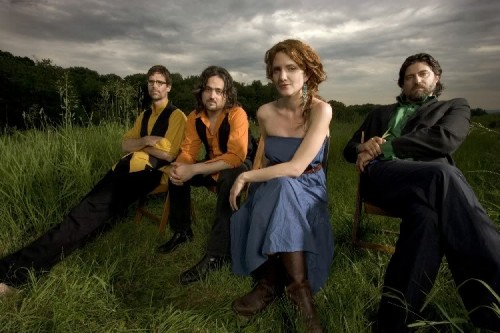 Writing an “Under the Radar” piece inevitably forces the writer to address the elephant in the room: Why is an artist you like enough to spend time researching and crafting a piece about considered to be “Under the Radar” by the vast majority of people? Hem, a band that formed in 2002 and sporadically released music until last year, would seem to have had so many advantages – intelligent songwriting, fine musicianship, a distinctive sound and, maybe most importantly, a lead vocalist with a scarily gorgeous voice. Seven of their songs were used in national commercials for Liberty Mutual Insurance, a classic Christmas cover was used in an ad for Tiffany’s, and other songs have appeared in television shows. They created music, which was well received by The New York Times, for a production of Twelfth Night for New York’s legendary Shakespeare In The Park program, featuring Anne Hathaway, Audra McDonald and Hamish Linklater. They were touted by outlets as diverse as NPR and Entertainment Weekly. Yet it appears that radar just doesn’t pick them up.

Hem was formed around the turn of the last century in Brooklyn, when songwriter and keyboard player Dan Messé and guitarist/producer Gary Maurer decided make a record. Guitarist Steve Curtis was recruited for the project, but they had no lead singer. It seems sort of shocking that three musicians living in Brooklyn didn’t know any singers, but that’s the band’s founding mythology. After an ad in The Village Voice failed to unearth the right singer, the project was scuttled. Sometime later, Messé received a call from Sally Ellyson, who (despite denying that she was a singer) sent him a tape containing a capella versions of lullabies that were recorded for a friend’s child. Ellyson was either lying about her talent, or had extremely low self-esteem, because her voice is remarkable, and Messé was smart enough to recognize it.

The project rose from the ashes, and Hem’s first release, 2002’s Rabbit Songs, was a beautiful album of languorous folk music, sometimes with lush arrangements. Although there is definitely some lullaby influence on the music, the album is far from dull, often tackling difficult subjects such as alcoholism and bad relationships, and it received great press. The band followed that up with an EP of covers, I’m Talking With My Mouth, but their momentum stalled somewhat when their label, DreamWorks Records, had problems and was sold, delaying the release of Eveningland until 2004. During this period, some of their music was going to be used in the film Shrek 2, but the turmoil at DreamWorks prevented that break. Of course, the movie was a huge hit, and the soundtrack was also a hit, spawning a successful single for Counting Crows — not Hem.

Hem’s next full-length release didn’t come out until 2006, when they released No Word From Tom. A collection of covers, demos, outtakes, live versions, and some new material, it gives us some good material to discuss, but back then it seemed like the band was marking time. They followed up later that year with Funnel Cloud, which added some new wrinkles to the band’s sound without changing their essential feel, but the buzz from the success of Rabbit Songs had long faded. The band released a couple of EPs in 2007 before embarking on their Twelfth Night project, which essentially had the band (and guests) backing the actors. It received a Drama Desk nomination for 2009/10, but did nothing to advance the band’s popularity.

Hem basically went silent at that point before regrouping to release 2013’s Departures and Farewells, the delay being caused in part by its members’ addictions and personal issues. Although the album was designed to be exactly what its title says, the band later released an EP, The World Is Outside in 2015. While one never says never (unless you are Romeo Void), it does appear that Hem has run its course. Messé wrote the music for the upcoming Broadway adaption of the film Amélie (featuring Phillippa Soo, who was the original Eliza Schuyler in Hamilton). Gary Maurer has returned to production, Steve Curtis and his wife Erika Simonian perform as Little Silver, and Sally Ellyson, sad to say, appears to have left the music business in favor of interior design.

Luckily, the band has left behind a number of excellent covers, some of which we’ve featured here over the years. Let’s look at a few of the others.

Hem – Jackson (Billy Edd Wheeler/Johnny Cash & June Carter cover)
Although not originally recorded by Johnny and June, “Jackson” is strongly associated with them, and their take on a song about a couple whose marriage had cooled was edgy and competitive. The two taunt each other with the level of debauchery they plan to engage in when they get to Jackson, a symbol of the big city. Not surprisingly, in Hem’s Eveningland version, things are quieter. No longer a duet, it is sung entirely from Ellyson’s perspective, and the band changes the lyrics to a discussion of what will happen when “we” go to Jackson, moving lines around, almost as if the wild times in Jackson will be more of a couples’ second honeymoon than an attempt at decadent one-upmanship.

Hem – Radiation Vibe (Fountains of Wayne cover)
Before joining Hem, Gary Maurer made a living working the other side of the board, as a producer and engineer. Among his workplaces was Stratosphere Sound, a studio owned in part by Adam Schlesinger of Fountains of Wayne, whose members were friendly with the members of Hem. One record Mauer worked on was Fountains of Wayne’s self-titled debut.  Hem decided to cover “Radiation Vibe,” the first song from the debut because, according to Messé, it “seemed like a stretch.” The end result, while it certainly rocks harder than a typical Hem song, is still a bit more gentle than the original.

Hem – A Dream Is A Wish Your Heart Makes (Cinderella [the movie, not the band] cover)
Not technically a lullaby, “A Dream Is A Wish Your Heart Makes” is nevertheless a song about dreams, and therefore fits securely into Hem’s wheelhouse. The original was written by Mack David, Al Hoffman and Jerry Livingston for the soundtrack of the 1950 Disney film Cinderella, where it was sung by Ilene Woods. It is exactly what you would expect from a Disney song of that era — a lush, Broadway-style tune with an orchestral score and some twittering birds. Hem recorded the song (which Ellyson has often said was her first favorite song) as more of a country ballad, featuring acoustic guitar and bass. Woods, sadly, suffered from Alzheimer’s disease late in her life, and although she did not recall singing the song, it was reportedly still a comfort to her.

Hem – So. Central Rain (R.E.M. cover)
Continuing the theme of “firsts,” R.E.M.’s “So. Central Rain” was the first of that band’s songs that Dan Messé recalls hearing. While Hem was in the studio mixing No Word From Tom, Michael Stipe was in the same studio, working with James Iha of the Smashing Pumpkins, which inspired Hem to do their first R.E.M. cover. Curtis suggested “So. Central Rain,” which had also been a fan suggestion, and the rest is history, of sorts. Hem’s cover is slower than the original, and its use of pedal steel guitar gives it a more traditional country sound than the original. Whatever the meaning of the song is, Hem’s cover turns its iconic repeated “I’m sorry” declaration from Stipe’s apparent anguish to Ellyson’s resigned sadness.

Hem – You Can’t Always Get What You Want (The Rolling Stones cover)
When the Rolling Stones recorded “You Can’t Always Get What You Want” in late 1968, the idea of using a classical choir was considered surprising. By the time that Hem recorded the song for the tribute album Paint It Black: An Alt Country Tribute to the Rolling Stones, classical elements in rock music was more common. But that does not detract in any way from Hem’s version of the song, which is beautiful, with a swelling orchestral arrangement. Ellyson occasionally displays more of her ability to belt out a song than usual, but still, the feeling of the song is gentler than the Jagger-fronted version. Jagger sang the song, commonly considered to an elegy to the optimism, idealism and disappointment of the sixties, as an exhortation to turn away from the romantic and focus on the possible. Hem, on the other hand, with a few decades of perspective, seem to be more accepting of the pragmatic message. Messé said in an interview that the song resonated with the band, which had never achieved all that they hoped, but still created some great music.

Bonus Cover: Mike Mills and Sally Ellyson – Jesus Christ (Big Star cover)
Mike Mills would probably not consider putting out a Christmas-themed Big Star cover for charity as a novelty, and as a big Alex Chilton fan, it was fitting that he recorded Big Star’s “Jesus Christ” back in 2006 to benefit the (apparently now defunct) Red Apple Foundation, a nonprofit organization dedicated to helping children become healthier. Hem’s Ellyson provides background vocals on the cover. The original, a precursor to the recent flood of Christmas-themed music from “alternative” bands, was distinguished not so much by its lyrics, but by being an almost perfect example of “power pop.” The Mills/Ellyson cover does not stray very far from the original – a bit slower, perhaps, but Mills’ lead vocals sound more awake than Chilton’s.

Sew up some Hem at Amazon.

3 Responses to “Under The Radar: Hem”