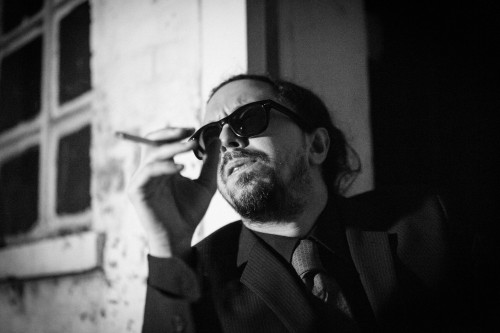 J Hacha De Zola hails from the town of Rahway, New Jersey and exhibits the state’s blue-collar work ethic: he’s already released two albums this year! And if that wasn’t enough output, he’s now got a bonus cut, his wild new cover of Grande’s “Bad Decisions.” It’s a wonderfully ramshackle production, a huge, swaying barroom roll somewhere between Tom Waits and the Pogues (longtime Waits saxman Ralph Carney in fact plays on his latest album, Picaro Obscuro). If you know Grande’s original, this cover is barely recognizable – and if you don’t the recording stands on its own.

“I’m not much of a singer, I’m probably more of a crooner,” Hacha De Zola tells us. “I really wanted to see if I could cover, or more accurately, ‘re-make’ a pop tune and have it sound like me. Despite only being three chords, and feeling like a fairly standard dance-pop song, I connected with the slightly dark connotations that could be drawn from it. It’s also in the ‘dark’ key of E minor, which I wanted to see if I could tease out.”

“I think if you are going to cover a song, then you should truly make it your own and take ownership of it for just a little while,” he adds. Mission accomplished. Listen to his cover of “Bad Decisions” exclusively below.