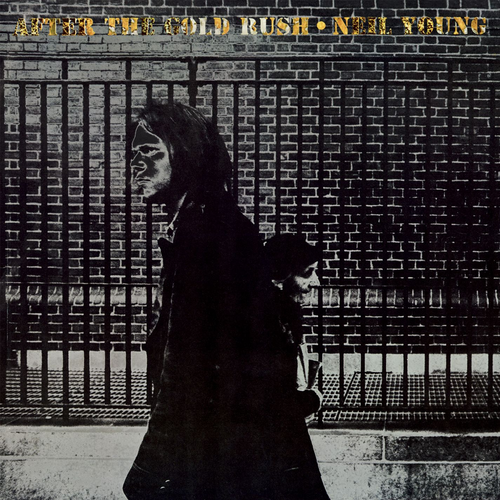 Surely After the Gold Rush, this “uniformly dull” record, as Rolling Stone magazine put it at the time, is the peak of Neil Young’s output?

Yet somehow I always seem to forget it, tending to immediately opt for the feistier, zeitgeistier options of Zuma and Ragged Glory, and the civilians always go for the milquier toast of Harvest. But nowhere is there such simple beauty as on this 1970 record, his third solo album after leaving Buffalo Springfield. It captures most of Shakey’s tropes on one disc – his ragged guitar, his playing always suggesting playing in mittens if not boxing gloves, his delicate acoustic whimsy, and the left-field oddness, exemplified here by “Cripple Creek Ferry.” True, volume and feedback are restrained, maybe 8/10 rather than his later 11 (at least), and it’s possible that the record is even the better for that.

So when I do remember After the Gold Rush, when I come back to it, it astonishes. I can play it side to side (yes, of course vinyl) and be instantly transported to a teenage me, dreaming of a future I couldn’t ever quite picture (and indeed haven’t quite yet), all hopes and fears, intermingled with tears and joy.

Yet it hasn’t aged. Really, it hasn’t. OK, I am biased, but these songs, especially re-interpreted through these eleven female voices, have a life beyond genre, Hence their scattering still within his current set lists, his aged old testament buoyed by the born-again vigor of the Nelson boys, born decades after this recording, the sons of old buddy Willie Nelson.

Much of the promise of After Gold Rush comes from the last minute decision to include Nils Lofgren, now better known as Springsteen’s long-serving second guitarist, appearing here on piano, an 18-year-old urchin. Alongside the ever simple, never simplistic, effectiveness of Crazy Horse, Young’s swing-door intermittent permanent band, and producer Jack Nitzsche, the blend was exquisite and never quite able to be reproduced, Young tending thereafter to use either the Horse alone or not at all.

Had I not made a decision to use only women’s voices in my choice of covers, I would have surely lifted a song from Lofgren’s solo paean to Neil and his songs, 2008’s The Loner: Nils sings Neil. Indeed, there is no shortage of cover material; some of these songs have upward of 30 readily accessible versions out there. And neither is the all-women idea particularly original, as these women know. So forgive this little affectation today as I present for you another purely feminine take, at least vocally. (STOP PRESS: nearly, see below!!)

Minnie Driver – Tell Me Why

This took some tracking down, being from the 3rd LP by Minnie Driver (yes, the film star), a covers project following her actually quite well received 2nd showing. I heard it at the time, but to find it now? Not on Spotify, nor (at least in my country) YouTube, and no downloads available on Amazon or iTunes. Uncertain why, as it’s not a bad record. OK, it’s not great either, but her cover of “Tell Me Why” is one of the high points. Played fairly straight, with only the piano arrangement being shaken into a more circular rhythm, maybe more European, maybe, than with the slight delay behind the beat of the original. I think it works.

Patti Smith – After the Gold Rush

Coming in at a lower key than Neil, Patti Smith’s simple and respectful 2012 cover of “After the Gold Rush” adds a layer of wistful poignancy lacking in the yearning original. At least until the playground chorale chip in toward the end, confirming yet again the adage about children and animals, especially if you are the arch-druidess of NY punk/artrock.

Angie Hart – Only Love Can Break Your Heart

I had even typed in Rickie Lee Jones for this before my computer reminded me otherwise. Bleaker and way more vulnerable than any of the many other versions, Australian ex-Frente! songstrel Angie Hart’s version of “Only Love Can Break Your Heart” imbues the sense that her heart has already been broken beyond repair. I always need a good weep after she sings and this is no different. (I also recommend her best version of this.)

Just as on the original, suddenly everything shifts up a gear and some, as guts and electricity kick in, so Merry Clayton wakes up the neighborhood here, submerging “Southern Man” in a swamp of delta tropes, all brass, swelling organ, harmonica and that wail, with added backing Ikettesque vocals. Heck, I didn’t even miss the guitar until I started writing. Why she never hit the heights of Tina T I will never know.

Seemingly almost more a throwaway, more a coda than even the original “Till the Morning Comes,” but no less delightful for that, the plonked piano, the steel and simple repetition enough for me, the fade leaving a faint memory and a smile. Little more to say, as Françoise Hardy doesn’t even sing enough to reveal her Francophone diction. However, we that know, know, that being enough for any (my) imagination to steer further, fickle and easy-swayed beast that I am, remembering this 60s chanteuse with that funny feeling adolescent boys sometimes get. (If you have an older brother who would have bought Songs of Leonard Cohen, ask him. He’ll know her. He just will. Trust me.)

Side 2 opens with “Oh, Lonesome Me,” a song so Young that it comes as a surprise that it isn’t, something that becomes then quite obvious when played at the speed of the original. An enormously covered song, the huge majority seem to whack it up to the lick of Don Gibson’s presumed intent, initially confounding the desperation in the lyric. But the relative swiftness conveys a whole different reference, that of giving oneself a good talking to rather than applying the blade to wrist. I knew nothing of Sue Thompson, but it seems she specialized in jaunty weepies, if there is such a genre and/or concept, within the country/pop interface of the late ’50s and early ’60s.

Claffy – Don’t Let It Bring You Down (Neil Young cover)

OK, you got me here – I had thought Claffy a she, and this vocal does seem at least to be shared between vocalists of both sexes. I’ve since discovered Claffy is a he, but it’s my piece and by God I will stick with this version of “Don’t Let It Bring You Down,” along with its uncredited (at least if female) vocal accompaniment. Which in turn has me feeling it may even also be a falsetto, the vocal perhaps of Alexander Claffy, the eponymous bandleader, with the male alongside being one Michael Stephenson. Worth a listen, I hope you will agree, proving again that with just a little counterpoint and syncopation, country begets soul.

A no-brainer. My delight of KW has already been recorded here, in my review of her consummate covers classic album Relations.. Her cover of “Birds” does nothing to dissuade me. Bleak. Stark. Beautiful.

Anne Richmond Boston – When You Dance, I Can Really Love (Neil Young cover)

Never heard of her? Me neither, even as I read that Anne Richmond Boston was the singer of ’80s band Swimming Pool Qs, themselves another gap in my knowledge. I think “When You Dance, I Can Really Love” is one of the weakest on After the Gold Rush, if not the weakest, yet this simple unadorned and essentially rockular copy has me seeing it in a completely different light. In anyone else’s grasp it is maybe not such a bad song at all; in Boston’s grasp, it truly excels.

Fayray – I Believe in You (Neil Young cover)

Such a good song, so few accessible covers. Yes, I am dismissing both Linda Ronstadt and Rita Coolidge: fine singers both, but each adding each too much saccharine to the salt that “I Believe In You” draws out in the form of streaming tears. I have heard Kathryn Williams do it credit live, but I have already included her, and there is no (legal) recording out there anyway. Dot Allison from Massive Attack, muse and acolyte to many, has an acoustic album called (what else?) Acoustic, available only at gigs, which has a version I crave to hear, but nowhere could I turn up either a copy or a link. So here is the biginJapan pop minx Fayray, from her 2005 covers album, called (what else squared?) Covers.

Pitchfork call Breakfast in Fur’s cover a “phantasmagoric tropical fantasia that feels like riding through It’s a Small World at Disney World after downing a bowl of ayahuasca.” Apart from giving no little guidance to the likely Pitchfork demographic, this at least relays the truth that this is not your father’s “Cripple Creek Ferry.” Which may be more a curse than a blessing, but, if you read the ‘Fork, I bet you have this version already. In a creepy way, given I always lift the needle as this song begins, I actually like this, it sending me into a reverie akin to falling asleep and forgetting to lift the needle. I am sure the dreams would be made of this. And what, pray, is ayahuasca?

The album After the Gold Rush is available on Amazon, as are these many tribute recordings (and one or two he has appeared on.)

4 Responses to “Full Albums: Neil Young’s ‘After the Gold Rush’”