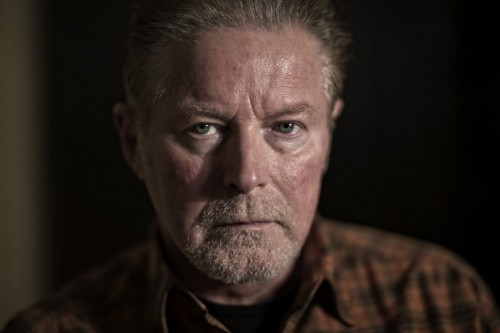 The name “Don Henley” conjures up images of the American West – dust swirling in canyons, expansive desert highways, the smell of colitas rising up through the air – but for me, Don Henley is damp, cold London afternoons spent tucked behind the couch in a small, cozy home. When I played Barbies, my dolls were raven-haired beauties, pretty mamas, and blondes dressed up in lace and lies, and it was Don Henley who sang the stories of their lives.

Born in Texas on July 22, 1947, Donald Hugh Henley started his musical career in high school as a drummer for the Dixieland band Shiloh. Their musical stylings caught the ear of fellow Texan and poultry aficionado Kenny Rogers, and they recorded a few songs for the Gambler-To-Be before disbanding in 1971. Later that year, Henley and Glenn Frey, playing back-up for Linda Ronstadt, decided to form their own band, and the Eagles released their eponymous debut album the following year. The album shot to 22 on the charts, featured three hit singles (“Take it Easy,” “Witchy Woman,” and “Peaceful Easy Feeling”), and installed the upstart band front and center in the California country-rock movement.

“Our main goal, at the beginning and throughout our career, was to write good, memorable songs, make albums that had little or no filler, that were consistent from beginning to end in terms of songwriting and production,” Henley told Rolling Stone. “We also wanted to be a good live act. We wanted to be the whole package.”

Or, in the worlds of Henry David Thoreau, “Be resolutely and faithfully what you are; be humbly what you aspire to be.”

Hit after hit followed (“Take It To The Limit,” “Lyin’ Eyes,” “Best of My Love”), culminating with 1976’s Hotel California. A journey through the seedy underbelly of the American Dream, it became one of the best-selling albums of all time, selling over 32 million copies worldwide and winning the Grammy for Record of the Year.

Unfortunately, success comes at a price, and animosity was building within the group. The acrimony boiled over in a 1980 show in Long Beach, California, when guitarists Glenn Frey and Don Felder got into an argument over lead vocals. Their row culminated in broken beer bottles, smashed guitars, and a tense performance in which Frey’s between-song patter consisted of whispers to Felder that he couldn’t wait to kill him. The split that followed was so rancorous that when asked when the band would reunited, Henley famously quipped, “When hell freezes over.” (Fourteen years later, the band reunited, releasing a live album and tour cheekily named “Hell Freezes Over.”)

During their 14-year hiatus, Henley launched a successful solo career, duetting with then-girlfriend Stevie Nicks on “Leather and Lace,” contributing “Love Rules” to the soundtrack of Fast Times at Ridgemont High, and penning the achingly nostalgic “Boys of Summer” – a paean to lost youth, summer love, and the Gatsby-esque desire in which a man knows he should just let it go, but…

In addition to his musical pursuits, Henley’s love of classic American literary lead to his work in the field of philanthropy and conservation. In 1990, Henley founded the Walden Woods Project, a non-profit organization dedicated to the legacy of Henry David Thoreau and preserving Walden Woods. To cover the cost of such an enormous venture, Henley hosted a series of benefit concert featuring Massachusetts’s very own Aerosmith, Elton John. Roger Waters, Melissa Etheridge, and Sting. He also donated some of the proceeds from the Hell Freezes Over album and tour – one of the most financially successful tours in history, grossing approximately $200 million – to the non-profit.

Thoreau believed that most men lead lives of quiet desperation and go to the grave with the song still in them. Don Henley is not most men. Songs bloom in him like California poppies and scatter throughout the universe. They envelop us like warm summer wind, and while their popularity might check out and ebb, they can never leave.

I didn’t really understand “Boys of Summer” until I heard the cover by the Californian pop-punk quartet The Ataris. Growing up in the ’90s, the only people I knew who listened to the Dead were either teenagers who wore tie-dye and smelled of patchouli and pot, or older folks with nice cars and Bose sound systems blasting “Friend of the Devil.” It wasn’t until the Ataris recontextualized the lyric – “I saw a Black Flag sticker on a Cadillac” – that I understood Henley’s genius regarding the fleeting nature of youth, the lure of nostalgia, and how adulthood claims us all.

Any West Wing fan knows all about Big Block of Cheese Day, but they might not know that the episode featuring this event is titled “Somebody’s Going To Emergency, Somebody’s Going To Jail,” a line from Henley’s “New York Minute.” Originally a down-tempo track about the fleeting nature of life, Herbie Hancock’s cover of “New York Minute” picks up the pace. In Henley’s world, if someone’s going to emergency or jail, they’re arriving via ambulance or worn police cruiser. In Hancock’s world? They’re arriving in a drop-top Cadillac, swollen with chrome.

As a child, I didn’t understand what “Hotel California” was about. I remember asking my dad about the line, “They stab it with their steely knives but they just can’t kill the beast.” His response? “I think it’s about the devil.”

Wait. My dad is cool with me listening to devil music? Uh, awesome.

It wasn’t until much later that I realized my dad was wrong and it wasn’t about shouting at the devil but rather, disillusionment with the American Dream. In their cover (featured in the 1998 stoner classic The Big Lebowski), the Gipsy Kings quicken the tempo and elevate the song to dizzying heights. The Dude might have hated the fuckin’ Eagles (and [rightfully] gotten punted from a cab for sharing that opinion), but even he can’t deny that the Spanish-accented strings really bring the song together.

Every woman has fallen in love with the Desperado archetype, untamed and hungry, at one point in her life. This will always result in heartbreak and is the very reason that mamas shouldn’t let their babies grow up to be cowboys. On her “Desperado” cover, Miranda Lambert’s low vocals float amidst the strings, sounding like a 2:00am phone call filled with heartache. She isn’t just singing this song; she’s lived it – and by her delivery, it seems like her love went unrequited until it was too late.

One Response to “They Say It’s Your Birthday: Don Henley”