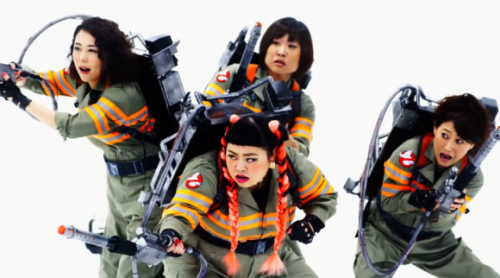 Because the Internet is stupid and people are stupid, I have to defend the upcoming Ghostbusters remake, not on the grounds that this movie will be good (I haven’t seen it yet) but because the Internet and stupid people, mostly men in their 30’s, think that Melissa McCarthy, Kristen Wiig, Kate McKinnon, and Leslie Jones are ruining their childhood. When did an ’80’s summer blockbuster become sacred and untouchable? It’s a movie. Grow the fuck up.

And yet, the onslaught continues. Four Japanese comedians – Tomochika, Oniyakko Tsubaki, Naomi Watanabe, and Shizuyo Yamasaki – have translated the Ghostbusters theme song in honor of the upcoming remake. But don’t worry, this cover is worthy, since it sounds exactly like the original. It’s goofy, just like the original movie. Just like the movie coming out tomorrow. Just like most major summer films starring high profile professional actors and ghosts and Chris Hemsworth.

Do I like this cover? Yes. Is it better than the Fall Out Boy & Missy Elliott remix? Probably. Do we need to write more pieces about how a goofy cover literally saved us from an atrocity that mortally wounded a cheesy hit from 32 years ago? No. De we ever need to write more articles about how a goofy cover can save us from damnation? Never. (unless it’s on this website)

Ghostbusters will be in theaters tomorrow, July 15th.

One Response to “Who Yokoha-call? Japanese Comedians Deliver Amazing Cover of ‘Ghostbusters’ Theme”