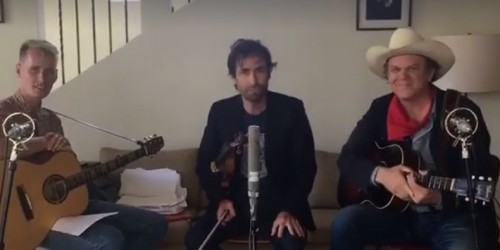 It’s no secret at this point that in addition to being a comedian, actor, and confused scientist, John C. Reilly is a more than credible folksinger. He recently joined Andrew Bird and Tom Brosseau on Bird’s living room couch for just about the best use of Facebook Live we’ve seen. The trio performed a bunch of folk covers, songs you might know from the Carter Family, Delmore Brothers, and more. They also do a more recent tune, “Cathedrals” by the Handsome Family, a band Reilly has opened for.

The video features everything you might want from the three: fiddlin’ and whistlin’ from Bird, high-lonesome falsetto from Brosseau, and a lot of joke-cracking from Reilly. The music itself is worth more preservation than exists in a 30-minute Facebook Live embed though, so we’ve pulled the four songs and posted them by themselves as well. Enjoy.