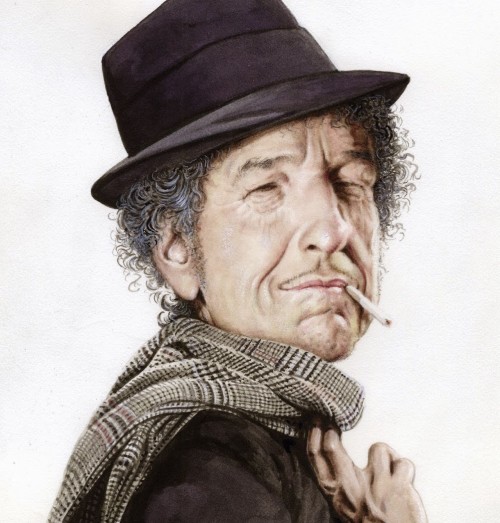 Last year, not long after Bob Dylan released his Frank Sinatra covers album Shadows in the Night, he began adding additional Sinatra-sung songs to his setlists: “All or Nothing At All,” “Come Rain or Come Shine,” and “Melancholy Mood”. We wrote – jokingly – that “Shadows Volume 2 may be closer than you think.” Well wouldn’t you know it… Six months later, he did indeed announce a second album of Sinatra covers, and all those new songs were on it. That second album Fallen Angels is now out (here’s our review) and, once again, he’s since added a new Sinatra song to his setlist. Does this mean we can expect a third album of Sinatra songs?

The new song this time is “I Could Have Told You,” a single Sinatra released in the mid-’50s, which you can hear below. If you’ve heard the first two albums, you know what to expect: Bob sings the hell out of this one over a tasteful jazz backing. Couple this with the remaining rumored recordings from the earlier Sinatra sessions, including “Didn’t He Ramble” and “Stormy Weather,” and it might be time to start thinking of what other songs you’d want to see on a Bob Sings Frank III album. If the past is a guide, we might have it before long.

Buy ‘Shadows in the Night’ and ‘Fallen Angels’.

7 Responses to “Is Bob Dylan Planning a Third Album of Frank Sinatra Covers?”