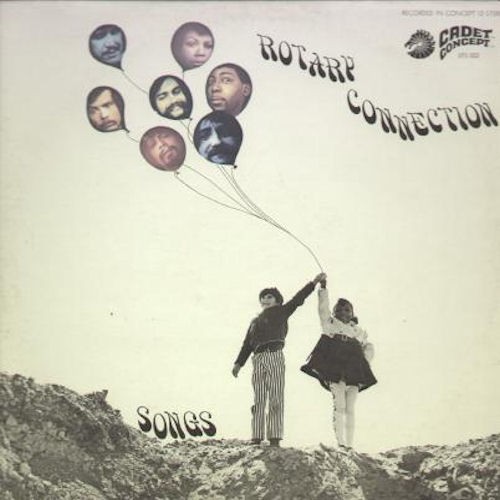 Taking a similar tack, psychedelic soul group Rotary Connection set their sights on the psych and pop hits of the day to create something wholly new and different with their 1969 album Songs. Where others who chose to take songs like the Band’s “The Weight,” “Respect” (either Otis Redding’s original or Aretha Franklin’s iconic version) and Cream’s riff-tastic “Sunshine of Your Love” stuck largely to the recognizable for understandable commercial reasons, Rotary Connection opted to take each song in an entirely new, often wildly experimental direction. By stripping the songs of their melodic and rhythmic familiarity, even the most played-out of these covers feels entirely new and different.

Far from a mere novelty cash-in, Songs proves to be a highly original re-workings of well-known material from an unjustly overlooked group of forward-thinking musicians. More than just the band that gave Minnie Riperton her start, Rotary Connection was an effective, inventive unit whose albums are very much in need of reevaluation. Few other groups at the end of the ’60s were making boundary-pushing soul of this caliber. That they chose to make the work of others their own is all the more impressive.

Opening track “Respect” gets a slow, simmering soul makeover that brings forth the urgency underpinning the song’s lyrics. Charles Stepney’s string arrangements set an unsettling tone into which Riperton and Sidney Barnes gently ease, slowing the tempo and lyrical delivery to a slinky, funky crawl. It’s a highly effective reworking of what has essentially become something of a standard and proves to set the tone for much of what is to come in the melodically near-unrecognizable renditions of well-known songs that follow.

The original country rock feel of “The Weight” all but disappears in Rotary Connection’s hands. Opting for more of an R&B/soul shuffle, they fully flesh out the track with strings, call and response backing choir, and Barnes’ smooth tenor taking impressive liberties with the song’s melody and feel. Given the number of times “The Weight” has been covered since the Band’s original offering, many of which take a verbatim approach, Rotary Connection’s drastic reimagining feels like a breath of fresh air, the song taking on a whole new life.

Similarly, Jimi Hendrix’s “The Burning of the Midnight Lamp” is stripped of its original connotations and reworked into something almost Morricone-esque, with Riperton’s voice at times sounding like an ethereal cross between a theremin and Alessandro Alessandroni’s iconic whistling. It’s a sweeping, magisterial approach that pushes the song from rock to baroque psychedelic soul.

Clearly stamping itself as being a product of 1969, Songs tackles three songs from Cream’s Disraeli Gears. While both “Sunshine of Your Love” and “We’re Going Wrong” are given impressive makeovers, “Tales of Brave Ulysses” is something of a noble failure, pushing the arrangement so far out that it fails to return in any discernible, coherent form. Here they simply attempt to cram too many ideas into one place, with Riperton’s shadow vocals tripping up under Barnes’ lead to the point of distraction. That they’re willing to push the bounds as far as they do somewhat helps to save the track from becoming a complete disaster, but it’s simply not enough to bring it to the level of the rest of the album.

Songs is available on Amazon.