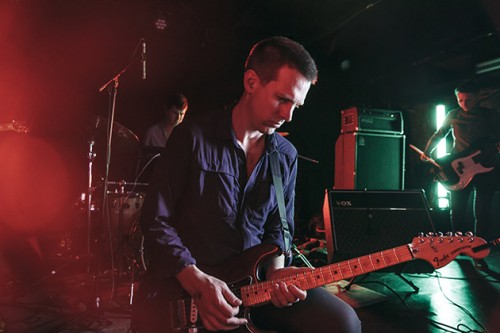 A couple weeks ago Shearwater played an intimate release show for their new album Jet Plane and Oxbow at New York City’s Mercury Lounge. They mostly played tracks from the album, but for the finale the band debuted a cover of David Bowie‘s “Look Back in Anger” in tribute to the late legend. And now, thanks to the good folks at NYCTaper, there’s an excellent recording.

“The album Lodger helped me through a tough time this past year, so we learned the whole fucking thing,” Shearwater frontman Jonathan Meiburg said by way of introduction. They must have been pleased with how the song went, since they’ve since announced their next trip to New York will include a free show where they perform Lodger in full. Details here – and if you’re not in NYC, don’t fret, they’ve promised to record the show.

Listen to “Look Back in Anger” below, and download the complete concert at NYCTaper.

UPDATE 4/5: NYCTaper now has the complete Lodger set to stream and download.

UPDATE 5/18: They’ve now performed the whole thing on video for The A.V. Club, watch below.

Check out more Shearwater at their website. And check out their last covers album here, which named the second best album of 2013.