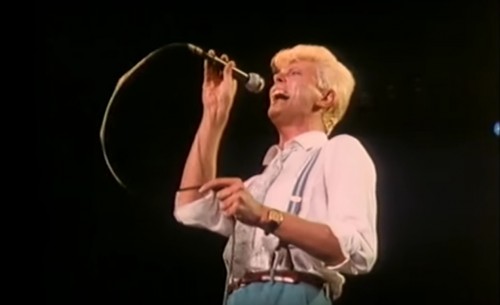 David Bowie has only covered “Imagine” once, on December 8, 1983. On this final date of his tour supporting Let’s Dance, and the third anniversary of John Lennon‘s assassination, Bowie followed his Lennon cowrite “Fame” with a one-time-only “Imagine” cover in Hong Kong. Audio of that has circulated for years, but video harder to come by. Now it has finally surfaced, complete with Bowie’s heartwarming intro about his friendship with John.

Though “Imagine” was only performed once, this was clearly not some tossed-off impulse. It has a huge sax-heavy arrangement that apparently the band had been working on for several days with a passionate vocal from Bowie. Though Bowie the songwriter has been getting much-deserved acclaim this month, Bowie the song-interpreter can sometimes be overlooked. This cover shows once again that is unparalleled at making a song his own – even one he’ll only perform once. And it’s never looked better than in this gorgeous footage.

This appears to have been filmed for a tour documentary, but not included. Some Bowie fan sites indicate this footage has never been seen before anywhere, though it’s hard to say for sure. Regardless, it hasn’t surfaced online until now and is every bit as powerful as you’d expect. Watch below.