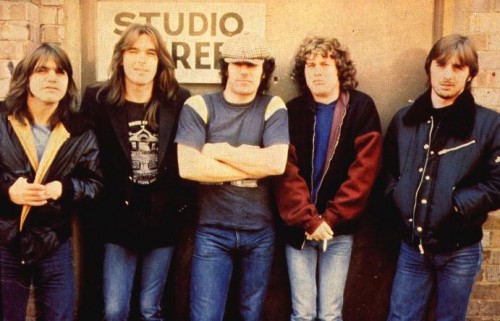 AC/DC was writing their first album after Bon Scott’s passing, and they wanted to remember him – not by mourning his death, but by celebrating his life. It was a tricky line to walk, but they made it look easy with “Back in Black,” the title cut from their landmark album. They may have dressed in dark clothes, but they wouldn’t bow their heads – not when there were mammoth riffs to rip through, or piledriving lyrics for new vocalist Brian Johnson to stomp about howling. The band paid their respects and got back to business in one fell swoop, creating a hard-rock anthem (or two) in the process.

If Spotify is to be believed, Dinah Eastwood has released only three songs, all covers, all of which have been released on multiple jazz-lounge-chill collections and one of which, her version of Duran Duran’s “Hungry Like the Wolf,” has racked up nearly 1.9 million listens. Her “Back in Black” will leave many listeners hoping for an imminent arrival for her next three songs.

The Astrophonix – Back in Black (AC/DC cover)

The Astrophonix, an Italian band that’s been big in Europe since 2003, mostly perform their own songs, but they have a way with their covers, giving a shot of adrenaline to acts from the Beatles to Eurythmics. Here, they replace “Back in Black”‘s swagger with some stray cat strut.

The Leisure Kings – Back in Black (AC/DC cover)

“The classiest cheese in Indy won’t be in the deli section of O’Malia’s.” That’s how the Leisure Kings, an Indianapolis lounge act, promoted one of their early gigs. The duo rose above their beginnings at the downtown Marriott to become the midwest’s answer to Richard Cheese, an answer with more affection than smirk. “Back in Black” gives an good idea of what they can do.

You’d be forgiven for thinking at first blush that this cover of “Back in Black” is actually a cover of James Brown’s “Sex Machine.” It’s not, but it’s awfully close. On their album AC/DC Soul Explosion – Live at Akkurat, Hot Kangaroo impress a lively tavern audience in Stockholm with this even livelier cover, getting them to shake their moneymakers all night long. (Some NSFW language, so think before you click the link.)

It’s amazing how badass “Back in Black” sounds with nothing more than a woman’s voice and a stand-up bass. Sven Faller hammers while Stefanie Boltz wails; together they make up Le Bang Bang, and together they’ve made a name for themselves in the German jazz world, using minimum accompaniment for maximum impact.

You can get back in black at Amazon for under a hundred dollars. If you don’t want to spend that much on a tuxedo, they sell the song for significantly less.

One Response to “Five Good Covers: Back in Black (AC/DC)”