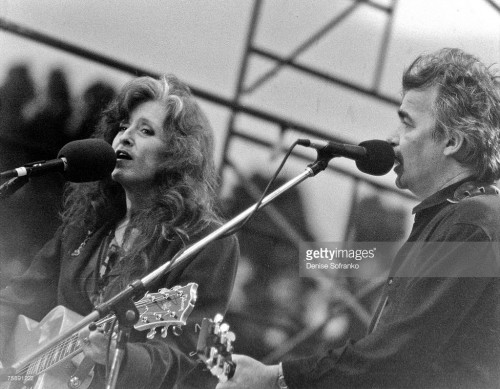 “Angel from Montgomery” is one of those songs that’s probably best known from a cover—Bonnie Raitt’s iconic 1974 version (and the many live recordings that have followed). In fact, this article was inspired by hearing Joan Osborne say that for years she was basically intimidated by the Raitt cover from ever performing it herself—until she heard Susan Tedeschi sing it, decided Raitt didn’t own the song, and started including it in her set.

According to John Prine, he wrote “Angel” when a friend who had heard Prine’s great song about getting old, “Hello In There,” suggested he write another song about old people. Instead, Prine decided to write a song from the perspective of a middle-aged woman who felt older than her years and unhappy with her life, and who wished for an angel to take her away from it all. (There’s speculation on the Internet that the song has something to do with a pardon from the governor of Alabama, but I think that is just wrong.) One of a number of remarkable songs on Prine’s self-titled debut album released in 1971, it became a popular cover almost immediately. Carly Simon recorded it the next year, but it was not included on her No Secrets album, although she performed it on TV shows (it showed up, in altered form, years later in a box set). Prine’s fellow Chicago folk scene stalwart Bonnie Koloc released a version in 1972, and John Denver covered it in 1973, on an album that broke into the Billboard Top 20.

But it was Raitt’s 1974 version that brought the song into mainstream consciousness; it clearly held meaning for her, and has become identified with her. Seriously—if you search for covers of the song, you are just as likely to find it identified as a Bonnie Raitt cover as a John Prine cover. I suspect that Prine, who may be better known as a songwriter than a performer, is fine with both Raitt’s version and the royalties it’s sent his way. In fact, they have performed it together.

Since then, a plethora of covers of “Angel From Montgomery” have been released. They’re done live in concert, posted on places like YouTube or Soundcloud, and even performed (not all that badly) by actors Kristen Stewart and Emile Hirsch in the movie Into The Wild. It is almost a required song for folkie singer/songwriters, and as you might expect, most of them hew pretty closely to either the Prine original or the paradigmatic Raitt version. But highlighting those wouldn’t be as much fun as finding a few that veer off the expected path. Because, if anything, the message of this song is about the danger of getting stuck in a rut.

John Denver isn’t going to try to sound like John Prine, and he certainly isn’t going to sound like Bonnie Raitt—he is going to sound like John Denver. And to be fair, when he covered the song, Bonnie hadn’t staked out her territory yet. Maybe Denver was trying for a little gruffer, Prine-like sound than was usual for him in this version, which starts off pretty stripped down. But by the end we have a full band, even strings, and while it is definitely more accessible (especially by 1973 radio standards) than the original, like so many pop confections of the era, it hasn’t aged all that well.

It took Bonnie Raitt to add a blues feel to what was already a sad song. But it took Watermelon Slim–who has spoken of the days in the ’70s when he “played peace rallies, sit-ins and rabbleroused musically with the likes of Bonnie Raitt”–to give it the full-on blues treatment. The former William Homans taught himself to play upside-down left-handed slide guitar in the hospital while recovering from injuries incurred during the Vietnam War. He became an antiwar activist, held down a series of jobs, obtained bachelor’s and master’s degrees, and emerged as an award-winning bluesman. This spare version, recorded last April in Slim’s new hometown of Clarksdale, Mississippi, the epicenter of the blues, highlights both Slim’s virtuosity and the timelessness of Prine’s writing.

Not all blues are sad. Erin Harpe, originally from Maryland but now based in Boston, and her band the Delta Swingers, play fun, upbeat danceable blues, highlighted by Harpe’s fingerpicking and soulful voice. While most renditions of “Angel” focus on the subject’s sadness, it seems like this one looks more toward the hope that she might have a better future. Or maybe this band just can’t help themselves from turning any song into a good time stomp.

Let’s give the Leslie Spit Treeo–a Toronto band that, despite winning the Juno Award for “Most Promising Group” in 1991, never made much of a commercial impact–some credit for reimagining “Angel” as a crunching, stomping rocker. Their cover, while not awful in a vacuum, lacks both the emotional subtlety of the original and the heart of the Raitt version. Nevertheless, it did achieve some attention, mostly north of the border, and helped lead to a contract with IRS Records. However, problems with said record label, poor marketing, and a bizarre dispute with Nabisco torpedoed the band’s success, and by the late 1990s, they were done.

When John Prine wrote “Angel”‘s opening line “I am an old woman,” he was in his mid-20s. Bonnie Raitt was about the same age when her cover came out; Susan Tedeschi, a couple years older. When Helen Boston, the soloist in this version, sang those words, she was in her early 80s, and her time-worn voice lends the song a truth, gravity, and authenticity that younger singers, no matter how talented, cannot match (although, to be fair, Prine and Raitt, now in their 60s, are getting there). Young@Heart Chorus, founded at an elderly housing project in Northampton, MA in 1982, is filled with seniors, and what makes them noteworthy is that a significant portion of their repertoire consists of rock music, even punk. The 2006 documentary about the group is wonderful, as is this cover.

If you would just like one thing that you can hold on to, grab a copy of the original at Amazon.