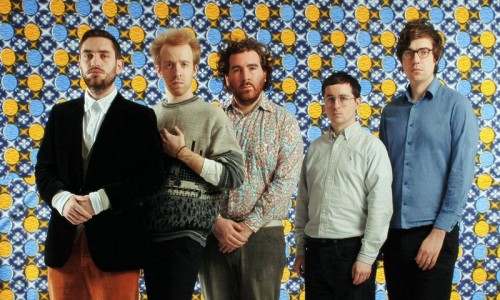 Indie-electronica group Hot Chip know how to rock a cover, as they proved when they put out one of last year’s best covers of the year. Now they’re back with one that could put them on that list in 2015 as well. The group is on tour now and has been performing Bruce Springsteen‘s “Dancing in the Dark” live at shows this summer. They recently released an official video and studio version of the song and its well worth a listen.

The video itself is a fast cut mix of live band footage and ’80s informercial/public television and is confusing in all the right ways. The people in the scenes seem to have a complete lack of self-awareness and no shortage of self-confidence; it’s a great metaphor for the feel of the song to come. After about a minute the actual music starts in as a slow synthesizer build behind lead singer Alexis Taylor’s uplifting vocals. By the second verse the drums race in, heavy on the hi-hat, bolstered by synths that, at times, are reminiscent of The Who’s “Baba O’Riley.” Dancing in the dark has never sounded like so much fun.

By five minutes in, the song is in full jam mode, when a familiar, echoey line drops in: LCD Soundsystem‘s “All My Friends” vocals splice in perfectly over the electronic mess. Considering the epic slow build of that song, the build here seems tame, but the mashup move is still effective. Hopefully by the end you’ll be dancing with reckless abandon. Check out the video below, and buy or stream the song on iTunes or Spotify.

Check out more from Hot Chip at their website